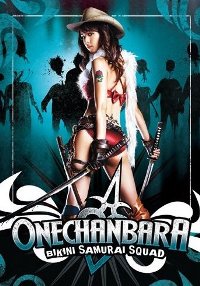 Director: Yohei Fukuda. Review by: Madman.
You'd think a movie about a bikini-clad, cowboy-hat-wearing, zombie-killing samurai siren would be fun to watch, but unfortunately that's not the case in “Onechanbara Bikini Samurai Squad the Movie.” Based on PS2 and Wii game series by the same name, Onechanbara attempts to recreate the bloody fun of the games and fails miserably. Literally everything in this movie is CG, and VERY bad CG at that. All the blood effects are computer-generated...poorly.
The film opens with some extras picking off the undead as they lurch toward their little shanty house. Out of the shadows pops our heroine, Aya (Eri Otoguro), who proceeds to slice, dice and dismember each and every creature in the joint. We're given a short back story on Aya and her bumbling over-weight protégé, Katsuji (Tomohiro Waki). We learn Aya's sister is responsible for her father's death, and as a result, is an emotionless killing machine hellbent on killing her sister and exacting revenge.
Aya joins forces with another attractive heroine by the name of Reiko (Manami Hashimoto) out to avenge the “death” of her daughter. If the plot line sounds familiar, that's because it is almost exactly like the recent “Blood the Last Vampire” live-action film. Simply replace all the zombies with vampires, and poof, same flick. I'll briefly mention there is air fighting, teleportation, a double-barreled shotgun with unlimited rounds, and an ACTUAL armpit sword stab (ya, like from high-school Shakespeare plays) in this film.. Continue reading here.