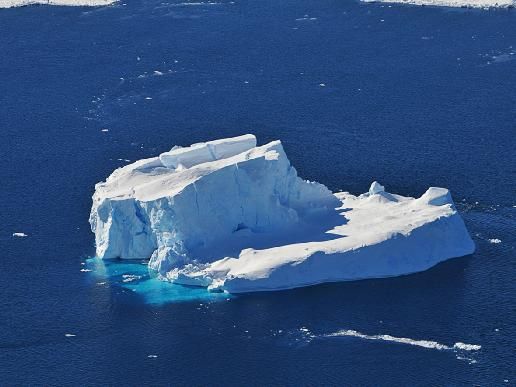 An iceberg is seen out the window of NASA's DC-8 research aircraft as it flies 2,000 feet above the Amundsen Sea in West Antarctica on Wednesday, Oct., 21, 2009. This was taken on the fourth science flight of NASA's Operation Ice Bridge airborne Earth science mission to study Antarctic ice sheets, sea ice, and ice shelves. At the mid-point of this field campaign, seven flights over Antarctica have been completed in the first 13 days of Operation Ice Bridge. The mission is on track to complete its 17 planned flights by mid-November. Which flight target is flown on a given day is largely determined by difficult-to-forecast Antarctic weather conditions. Several of the instruments onboard cannot gather data through clouds. Twice so far, however, flights have been scrubbed at the last minute due to snow at the airport in southernmost Chile. As of the landing of the Oct. 27 flight, completed targets included: three flights over glaciers, two over sea ice, one over the Getz ice shelf, and one to study the topography of the ice sheet on the mission's closest approach to the South Pole. Photo Credit: NASA/Jane Peterson (More at NASA Picture Of The Day)

A Sea of Ice