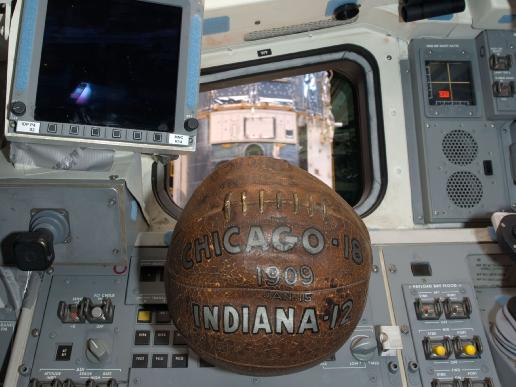 Edwin P. Hubble--famed astronomer--and basketball star? In fact, Dr. Hubble was both. The University of Chicago alumnus was a member the UC Maroons team that in 1909 won the college championship over Indiana University. It's only fitting that the man, the astronomer, the basketball star be honored for all of his accomplishments as the college championships are being played again in Indianapolis in 2010. In this image from May 2009 during the Hubble servicing mission, NASA astronaut and fellow University of Chicago alumnus John Grunsfeld paid homage to Dr. Hubble, after whom the telescope was named, by photographing the team’s vintage basketball aboard space shuttle Atlantis. The Hubble Space Telescope is visible through the portholes. Image Credit: NASA (More at NASA Picture Of The Day)