Space Preparing for the Next Mission

NASA Picture Of The Day
Preparing for the Next Mission 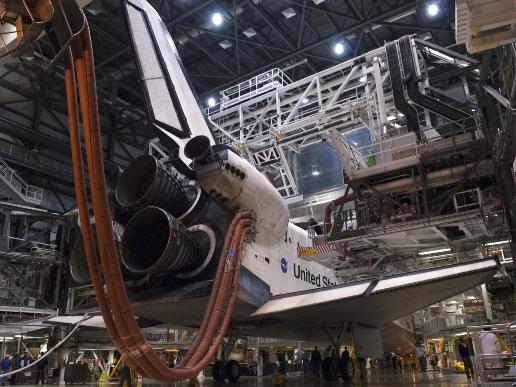 At NASA's Kennedy Space Center in Florida, work platforms are moved into position around space shuttle Endeavour in Orbiter Processing Facility-2, following its touchdown at the completion of the STS-130 mission to the International Space Station on Feb. 21.
Processing now begins for Endeavour's next flight, STS-134. The six-member STS-134 crew will deliver the Express Logistics Carrier 3 and the Alpha Magnetic Spectrometer to the International Space Station, as well as a variety of spare parts including two S-band communications antennas, a high-pressure gas tank, additional spare parts for Dextre and micrometeoroid debris shields. STS-134 will be the 35th shuttle mission to the station and the 133rd flight in the shuttle program. Launch is targeted for July 29. Image Credit: NASA/Kim Shiflett
(More at NASA Picture Of The Day)

Space Preparing for the Shuttle Mission