NASA Picture Of The Day
Rachmaninoff on Mercury 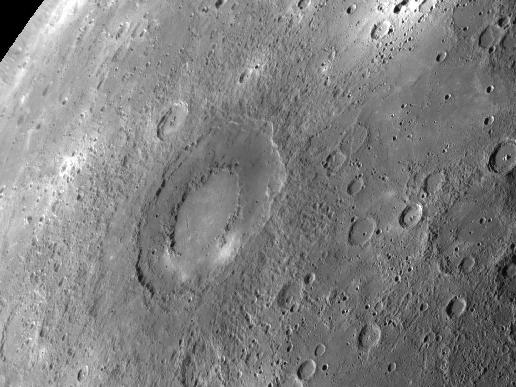 The International Astronomical Union (IAU) recently approved the name Rachmaninoff for an intriguing double-ring basin on Mercury. This basin, first imaged in its entirety during MESSENGER's third Mercury flyby, was quickly identified as a feature of high scientific interest, because of its fresh appearance, its distinctively colored interior plains, and the extensional troughs on its floor. The basin's name honors the Russian composer, pianist and conductor, Sergei Rachmaninoff (1873-1943). IAU names craters on Mercury after "deceased artists, musicians, painters and authors who have made outstanding or fundamental contributions to their field and have been recognized as art historically significant figures for more than 50 years." The process of proposing a new crater name includes gathering fundamental information about the crater, such as the crater's central latitude, central longitude, and diameter. Justification is provided as to why the crater is of sufficient scientific importance to be named, and details are provided about the name choice, including sources that support the worthy contributions made by that individual. Ten newly named craters join 42 others named since MESSENGER's first Mercury flybyin January 2008. Image Credit: NASA/Johns Hopkins University Applied Physics Laboratory/Carnegie Institution of Washington (More at NASA Picture Of The Day)