Rarity from the Hollow + Reader's Digest

Rarity from the Hollow by Robert Eggleton is the most enjoyable science fiction novel I have read in several years. Who could think of an intergalactic handbook for entrepreneurs? Who could turn a tree-hugger into a paranormal event of death-defying significance? Who could create characters so believable, so funny, so astonishingly human (and not)?

I put this book on my IPhone, and it followed me everywhere for several days. Strangers smiled politely at my unexpected laughter in the men’s room toilet stall. They looked away as I emerged, waving the IPhone at them as if it might explain something significant.

Oddly, the novel explains a great deal that has become significant in our society. Rarity from the Hollow is satire at its best and highest level. It is a psychological thriller, true to traits of mankind (and other species). It is an animal rights dissertation (you will laugh when you understand why I write that). It celebrates the vilest insect on earth (make that Universe).

The characters created by Robert Eggleton will bug your brain long after you smoke, uh, read the final page. Thanks for the laughs, the serious thoughts, the absolute wonder of your mind, Mr. Eggleton. A truly magnificent job.

However, if you are prudish or easily offended, please read the following Caution before you purchase:

Piers Anthony found that my novel was “…not for the prudish.” Kevin Patrick Mahoney, editor of the once noteworthy site, Authortrek, found that it was, “…not for the faint hearted or easily offended….” An early voice in the 1st chapter speaks about things that no child should know. It is that of a traumatized child – a voice most of us never listen to, or want to hear, but in real life is screaming. This passage is mild in comparison to some of the stuff that kids have said during actual group therapy sessions that I facilitated over the years. By child developmental stage, it is similar to the infamous early adolescent insult in E.T: “penis breath.” It is tame in comparison to the content of the popular T.V. series, South Park, which was devoured by millions of teens.

Except for a scene involving domestic violence in the 3rd chapter, this early dialogue is the only mildly graphic content. There are no graphic sex scenes in the novel. The renewed romance between the protagonist’s parents does include sexual reference. The android coming of age during his pursuit of humanity is reality based. However, Lacy Dawn never lets the android get farther than to kiss her on the cheek. The android expresses no interest in sex – he falls in love, all consuming love by the middle of the story. The “F word” is used once, but there is no other profanity.

Rarity from the Hollow is a Children's Story for Adults 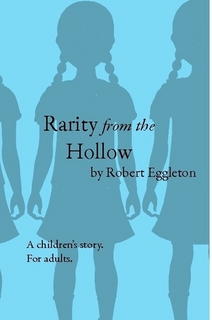 Most Recent Review of Rarity from the Hollow

B
Read the Reader + recommendations please..