Although the movie has been shelved, we are going to see some screen outings from the old team.

Red Dwarf voyages back to Earth 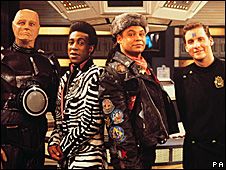 Cult comedy Red Dwarf is returning to TV, 21 years after its initial launch.
The show has been resurrected by digital channel Dave for a two-part Easter weekend special, which sees the cast finally return to Earth.
Written and directed by Red Dwarf co-creator Doug Naylor, the new show reunites the line-up, including Coronation Street's Craig Charles.
The hit show, which ran for eight series on BBC Two between 1988 and 1999, won an International Emmy award.
'No holds barred'
Set three million years into the future, the show followed the exploits of Dave Lister, slovenly crew member of the mining ship Red Dwarf - and the last man in the universe.
He was joined in his weekly attempts to make it back to Earth by a cast of oddballs including human hologram Arnold Rimmer, mechanoid servant Kryten and Cat - a preening half-man, half-animal who evolved from the ship's cat.
At its peak, Red Dwarf pulled in around eight million viewers and was broadcast in more than 25 countries.
It has sold more than seven million DVDs and videos.
The new two-part series Red Dwarf: Back to Earth will be followed by a "no holds barred" episode without sets, special effects or autocue.
The weekend will climax with Red Dwarf: the Making of Back to Earth, a behind-the-scenes special from the new episodes.
Click to expand...

Arnold Judas Rimmer is a fantastic character.
A protocol quoting, Politically Correct LOSER. An insufferably naive know it all?
Who doesn't have a "Rimmer" or ten in their family? On the net? At work? In a service organization? At a Party? Check-out line? Any & every where?
Kudos to the creators/writers.