At the approximate position of the Sun we set this spot as time zero. Our SOLar System has passed this point 20 times. The 'atomosphere' in this zone is conducive to life but there is history of this region related to mass extinctions of life and major planetary changes. 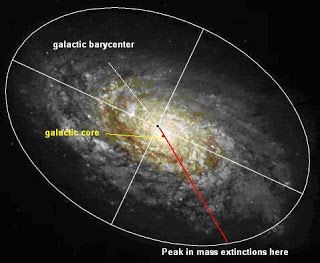 The above graphic does not designate the relative position of the Sun. It does however show a point of peak mass extinctions.

?Is this region of the galaxy hotter, colder, denser, sparser or irradiated with a form of energy that is hostile to life?

?Does this region of space move at a constant to the solar system position?

Figuring that the galaxy is bound by the known laws, A center of gravity spinning derbis would tend to toss the outer layers away from their orbital plane. Spiral arms would break off and be thrown outward into other arms.
The Orion Arm is an example of this.

Orion Arm (AKA Local Spur Arm) is evidence of this action 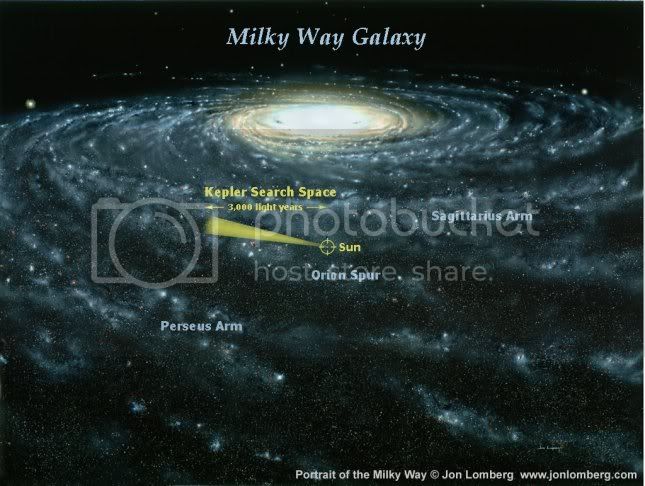 Notice that the Sun is depicted in the Orion Spur between Perseus and Sagittarius Arms.

Now. If the galaxy is thowing off some of its outer matter and spinning at roughly 225 million miles per year. The position of the Sun cannot be constant.
Not only is it slowing it is also covering more distance.

If there is a 'Death Zone' in the galaxy it would be likely that the Sun would stay in its area longer and longer as time passes. It would also take longer and longer to encounter that zone in its galactic year. 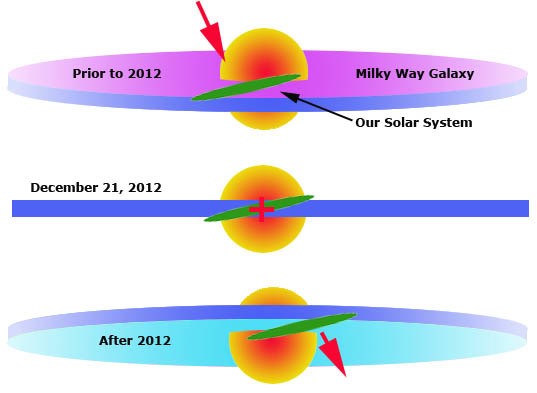 Relativity is construed by us using our planet as the stationary. Speeds are determined in relation to movement to or away from our point of reference. A stationary point in the universe would apear to be moving to any observer within the influence of the galaxy. Though completely motionless to the universe it would affect the galaxy as if it were moving incredibly fast. Its mass would affect the gravitational forces the galaxy produces. From quarks to superclusters the effect would be immense and would change the paths of galactic arms and little star systems like ours. We must also remember that the Milky Way galaxy also rotates around in a local group called The Local Group

If we were able to create a method of making a ship completely stationary in respect to the universe could we use it to 'travel' space and time?

Yes! But it has to be powerful enough to resist the forces acting upon it which is far easier to accomplish than trying to generate sub-light propulsion..or say...open a wormhole which, both take an almost limitless supply of energy.
Think of it in terms of an orbiting space station, it's traveling at 35,000+\- miles per hour but only in relation with a constant point on the earth, in relation to other orbiting masses it may well be sitting still. An over simplified version would be two sky divers reaching terminal velocity. They are falling at several hundred feet per second but relitive to each other they may stay eye to eye.
This is how we (my race) travel the infinite expanse of the universe with a finite amount of time and energy. I'm happy to see that Humans are evolving mentally quickly enough to make these discoveries on their own accord rather than being fed knowledge they are not ready to use.
Rest assured you are not alone, others will be willing to guide your race as you advance naturally but many natural wonders require the maturity and responsibility that grows from the monotonous task of problem solving in order to weild the power they posess.

Thanx Birdman!
The difficulty I see is achieving the 'Lock' and then keeping it locked.
We need to create some type of gravitational mass dampners to prevent the ship from moving with the tidal forces it will encounter.
Perhaps the answer lies in the vibrational frequency of the Universe. Set up a molecular vibrator that matches or exactly cancels the Universe's frequency.
We would need phase chambers that would keep or people isolated. Perhaps a shell within a shell type construction. The ship would phase but the interior would not. Perhaps a plasma insulator between the shells could also be used as the energy source. A coating of dwarf star material on the inner shell could simulate gravity.

The only propulsion that would be needed would be to achive distance and slowing or accelorating to match speeds. We could make the craft as large as we want because thermodynamics would not be an issue if it is phased out.

Yes indeed, most of those ideas are very interesting and I'm tempted to push you in the right direction but I fear I have said more than I should have already. Keep working on it but be careful with the harmonics, acidentally hitting the wrong frequency can be dangerous to say the least.

Thanx for the heads up!

Writer
What worries me most is the Scutum Crux. That sounds like the kind of ailment which I'd really not like to suffer from...