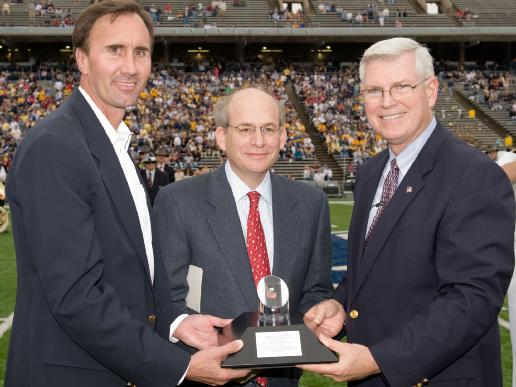 During the half-time ceremonies of the Rice vs. Navy football game Oct. 10, 2009, Johnson Space Center Director Mike Coats presented Rice University President David Leebron with the Ambassador of Exploration Award that was presented posthumously to President John F. Kennedy. From left to right are Rep. Pete Olsen (R-TX), Rice University President David Leebron and JSC Director Michael Coats holding the award. On July 20, the 40th anniversary of the Apollo 11 moon landing, NASA honored President Kennedy with the award for his vision and leadership in landing a man on the moon. The Kennedy family has selected Rice University to house and publicly display the award at Fondren Library. President Kennedy called for a national initiative to go to the moon during a speech given at Rice University on Sept. 12, 1962. Image Credit: NASA/Lauren Harnett (More at NASA Picture Of The Day)