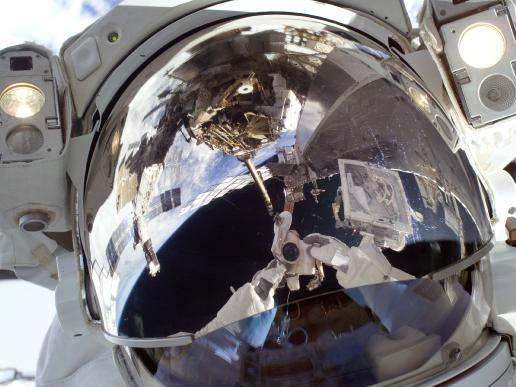 Astronaut Robert Satcher uses a digital still camera to expose take a self-portrait during the STS-129 mission's first spacewalk. During the six-hour, 37-minute spacewalk, Satcher and astronaut Mike Foreman installed a spare S-band antenna structural assembly to the Z1 segment of the station's truss, or backbone. Satcher and Foreman also installed a set of cables for a future space-to-ground antenna on the Destiny laboratory and replaced a handrail on the Unity node with a new bracket used to route an ammonia cable that will be needed for the Tranquility node when it is delivered next year. The two spacewalkers also repositioned a cable connector on Unity, checked S0 truss cable connections and lubricated latching snares on the Kibo robotic arm and the station's mobile base system. Image Credit: NASA (More at NASA Picture Of The Day)