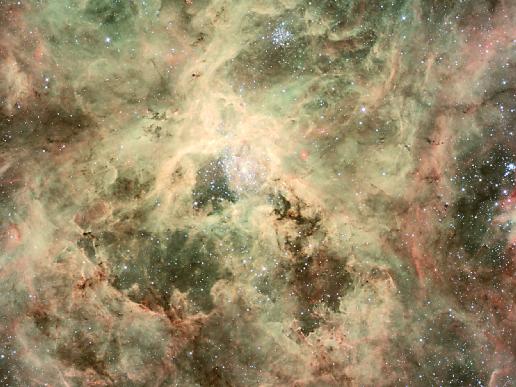 A heavy runaway star is rushing away from a nearby stellar nursery at more than 250,000 miles an hour, a speed at which one could travel to the our moon and back in two hours. This is the most extreme case of a very massive star that has been kicked out of its home by a group of even heftier siblings. The homeless star is on the outskirts of the 30 Doradus Nebula, a raucous stellar breeding ground in the nearby Large Magellanic Cloud. The stellar nusery is seen at the center of this image. The finding bolsters evidence that the most massive stars in the local universe reside in 30 Doradus, making it a unique laboratory for studying heavyweight stars. Also called the Tarantula Nebula, 30 Doradus is roughly 170,000 light-years from Earth. Tantalizing clues from three observatories, including the Hubble Space Telescope's newly installed Cosmic Origins Spectrograph (COS), and some old- fashioned detective work, suggest that the star may have traveled about 375 light-years from its suspected home, a giant star cluster called R136. Nestled in the core of 30 Doradus, R136 contains several stars topping 100 solar masses each. Visit Hubble Catches Heavyweight Runaway Star for more information. Image Credit: NASA, ESA, C. Evans (Royal Observatory Edinburgh), N. Walbom (STScI), and ESO (More at NASA Picture Of The Day)