Sail Power, what about Hydrogen Power?

An interesting technology is being harnessing for medium sized container ships plus could be used for liners. The idea being to have a sail 200-300m off the sea level to harness the winds up there to pull the boat along.

Reducing fossil fuel use, the resulting spills (have you seen the story of the shipwrecked vessel where experts think other ships are cleaning their engines at sea nearby adding to the contaminants?) and making things cheaper is preferable in this world where we care about these things.

I suppose the next technology to look at would be to draw sea water in, clean and purify it and use it as hydrogen based fuel for a different format of engine. Although that might be too costly and require the burning of fossil fuels to achieve its process. We know we cannot allow civilian ships to have nuclear reactors due to the amount of captains putting their ships on the rocks and the sometimes lacking crews who aren't specialised or paid enough to look after nuclear reacors like the crew of a military ship[/submarine.

Kite to pull ship across Atlantic 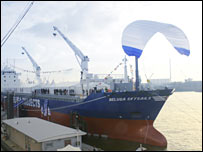 The technology is aimed at cutting CO2 emissions

The world's first commercial cargo ship partially powered by a giant kite is setting sail from Germany to Venezuela. The designers of the MS Beluga Skysails say the computer-controlled kite, measuring 160sq m (1,722sq ft), could cut fuel consumption by as much as 20%.
They also hope the state-of-the-art kite will help reduce carbon dioxide emissions, as it tugs the ship.
Fuel burnt by ships accounts for 4% of global CO2 emissions - twice as much as the aviation industry produces.

See how the kite ship works
The MS Beluga SkySails' maiden transatlantic voyage is from the northern port of Bremerhaven to Guanta in Venezuela. The ship is expected to leave the German port at 1700 local time (1600 GMT).

It's kind of back to the future


The BBC's Steve Rosenberg, on board the vessel, says the computer will enable the kite to harness the full power of the wind.
"The maiden voyage marks the beginning of the practical testing during regular shipping operations of the SkySails System," says Stephan Wrage, managing director of SkySails GmbH.
"During the next few months we will finally be able to prove that our technology works in practice and significantly reduces fuel consumption and emissions," he said on the company's website.
Free energy
"We're absolutely excited," said Verena Frank, project manager at Beluga Shipping GmbH, SkySails GmbH's partner.
She told the BBC's World Today programme that the project's core concept was "using wind energy as auxiliary propulsion power and using wind as a free of charge energy".
"Nevertheless, it differs very much from traditional sailing, as we do not have any bothersome mast on deck which might be a hindrance to cargo-loading operations."
Ms Frank said the efficiency of the kite depended on wind and weather conditions.
But the advantage of the SkySails system "is that you do not need only backward winds - there can also be side winds and you can still set sail," she said.
She said the kite could be used on medium-size cargo ships, cruise liners and trawlers.
HOW THE KITE SHIP WORKS

The kite sail will help reduce annual fuel costs by 10-35%. Reduced fuel also means fewer harmful carbon emissions
The large towing kite resembles a paraglider and is shaped like an aircraft wing, to enable it to take advantage of different wind directions
It operates at 100-300m above surface level - much higher than a normal sailing craft - where winds are stronger and more stable
The kite can be used in winds of between 12-74km/h (7-40 knots) and not just when the wind is blowing directly from behind the ship

Everything old is new again.

Well, it's technically new technology. Whilst called a "sail" the fact that the "sail" is up in a different area of the atmosphere where known air currents are do tend to make this a slightly different technology!

It is a shame that we've gone on for so long with this size of ship being driven by fossil fuels.

I wonder if the technology was created as a result of extreme sports? A new generation of scientist that has seen or been involved in using sails on ropes attached to buggies and racing up and down beaches?

Surfing Through the Power Grid

Space Powering Up the Station