"By applying electric fields, we can arbitrarily rotate the arms in a plane," explains the head of the Chair of Physics of Synthetic Biological Systems at TU Munich. His team has for the first time managed to control nanobots electrically and has at the same time set a record: The new technique is 100,000 times faster than all previous methods.

One reason these molecular machines have not been deployed on a large scale to date is that they are too slow.

The new control technology is suited not only for moving around dye molecules and nanoparticles. The arms of the miniature robots can also apply force to molecules. These interactions can be utilized for diagnostics and in pharmaceutical development, emphasizes Simmel. "Nanobots are small and economical. Millions of them could work in parallel to look for specific substances in samples or to synthesize complex molecules -- not unlike an assembly line.

Ever since I read Eric Drexler's Engines of Creation I have been fascinated by the implications of nanobot technology. Seems we are now on the path to making those technologies a reality.
Its still in its infant stages but this is a marked advancement with significant implications.

It still needs a fast AI control method but even with slow programming it opens the possibilities of rendering 3d printers obsolete.

Consider this possible future scenario;
You by a Nano Assembler Chamber
you unpack it and hook it up to your computer
You download a pattern, insert the recipe ingredients
you turn the machine on and it starts constructing the object.
You use it and get tired of it.
You put it back into the machine and pick a different recipe
Add the ingredients the processor requires and it makes the new object
using the molecules from the old object.
The leftover ingredients go into an internal storage catch-all
Ingredients that can be reused for future projects

With a fast AI controller, you wouldn't need the ingredient packs - you wouldn't need a pattern, you just tell it what you want it to make and add a bag of material and it rearranges the atoms to create the molecules it need to complete the project.
It can also be used as a recycler of anything because the AI directs the assemblers to break apart the molecules into atoms.
I

Hi all, nice to be here,

I've given a lot of thought to nanobots and their dark side.

I can envision becoming infected with nb technology that could envelop the world into a situation where you either had to go through some kind of situation that destroyed all electric activity or carry anti-body type nbs to prevent or kill those trying to enter your body to do you harm. I mean if they could go in and destroy cancer cells, they could be used to destroy healthy cells.

Consider something as simple as an infection of nbs which cause a small blood vessel explosion in say your forearm which spells out a phone number. You WOULD call it. For a price they are given some kind of antidote ... if they didn't the number kept appearing again and again on the body .. you get the idea. Make a great start for a movie wouldn't it?

along that line of thinking I have questions I am not smart enough to know how they would work out so if you can help me figure out what could and couldn't really happen, it would be interesting (at least to me).

could a electro-magnetic experience (not sure that is worded correctly, but its the kind of bomb that shuts down all electric stuff) destroy nanobots inside a person's body?

if the above is true, is there any way the nbs could protect themselves from such an occurrence?

perhaps some of you saw the remake of lost in space, (I think it was in this movie) they had a space suit that could cover the body and then uncover and it appeared to me to look like what I would expect nbs to be able to achieve (some day). Do you think that's a probability of happening?

following the line of thinking that nanobots are robots which create a smaller version of themselves with each generation until they are so small .... do you think that would hold true with AI? scary to think that something so small could achieve a level of logic as to decide humans were not necessary ...

Do you think they create weapons that shoot something since they wouldn't have access to gunpowder. I'm thinking air rifle type projections off the top of my head. This would be useful in preventing invasions etc.

Thanks for putting up with me. 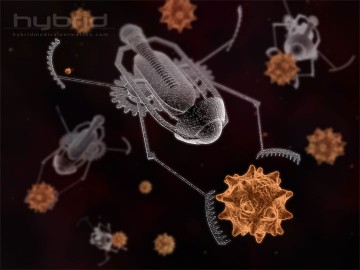 This is a representation of a nanobot assembler.
Specifically one for use in a living organism.

The nanobots are designed with a specific set of instructions.
Drexler suggests coded nano-strips.
He also indicates they could be coded to receive instruction from a specialized AI.
Being coded to function means that when it is not performing its function it is inert.

Nanobots are too small to have an AI themselves. They don't think past their programming.
The controlling AI is programmed to instruct the nanobots to replicate.
They are also programmed to stop replication at a programmed quantity needed to perform the programmed task.

Runaway nanobot replication is called the "Grey Goo" effect.
A condition that can be halted thru the controller AI programming or removing base material.

We can use redundancy to control replicators. Just as repair machines that compare multiple DNA strands will be able to correct mutations in a cell's genes, so replicators that compare multiple copies of their instructions (or that use other effective error-correcting systems) will be able to resist mutation in these "genes." Redundancy can again bring an exponential explosion of safety.
Click to expand...

The 'threat' you speak of is possible but improbable due to safeguards that will be taken against it.
I

So interesting to me because I can envision so much these things could accomplish, both good and bad.

Most appreciate you taking time to put up the image. (with me a pic is prob worth 2000 words).

I really had no idea they were so far along. Have they created nanos that can be injected into the human body yet?

I truly thought this was still on a "it should work" basis rather than actual. How cool.

I recall a comedian, Tom Papa , saying that he heard that kids born today have a good chance of living a thousand years (due to all this new tech) .... but that unfortunately the rest of us are gonna just miss the cut.

Science is on the verge of major medical breakthrus.
I remember reading something on identifying the component on DNA or cell structure that causes cell degradation. Can't recall the source or I'd link you to it.

Right now, nanotech is being used to hijack viruses to deliver drugs directly to the cells.
Current Progress of Virus-mimicking Nanocarriers for Drug Delivery

Nanocarriers with the viral infection machinery are often composed of virus-derived peptide or proteins. These viral components enhance the binding and uptake into target cells, followed by release of the payload into the cytoplasm. Virus-like particles (VLPs) are composed of recombinant viral proteins. When the structural proteins of viruses are expressed in exogenous cells, recombinant VLPs can be formed like the native virus. In other cases, purified capsid proteins can form VLPs in vitro in a self-organizing manner. Other types of nanocarriers are hybrids of viral components and synthetic materials. 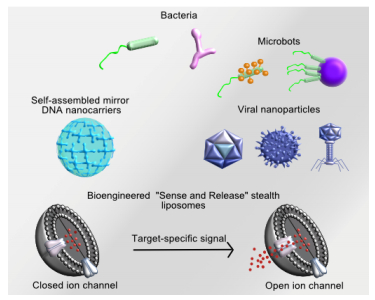 In Engines of Creation, Eric Drexler describe what advanced nanotechnology could give us.

Basically, we could repair nearly anything. At the atomic level.
Bodies, the environment, anything.
Plus we could build nearly anything by rearranging atoms to make molecules.
Even DNA and RNA are composed of atoms. 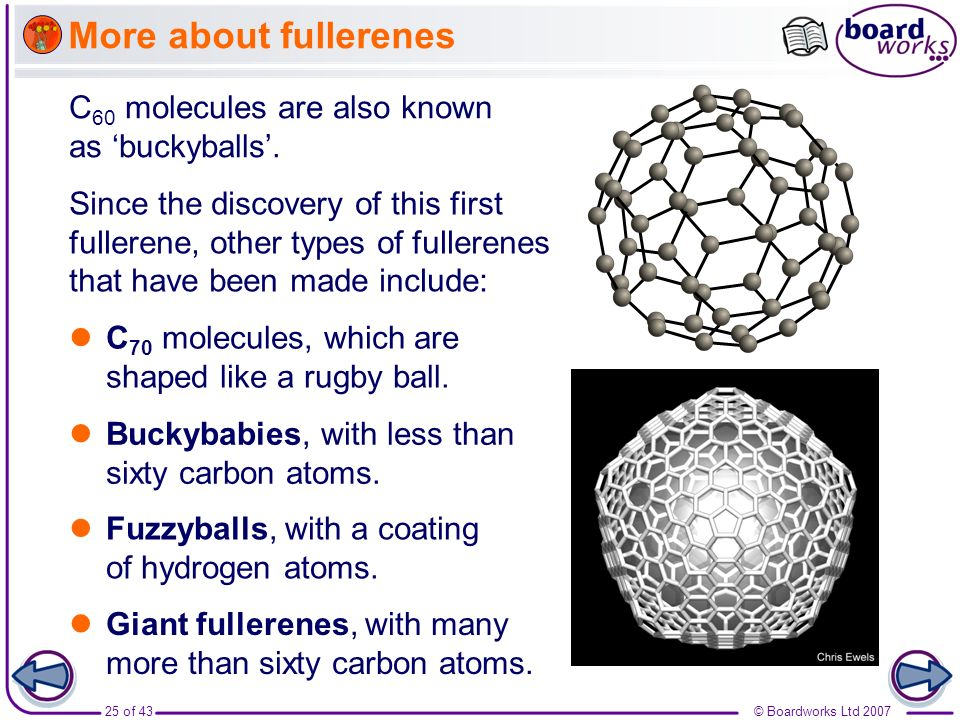 We're getting really good at rearranging carbon atoms.
Carbon nanotubes was proposed as a Space Elevator ribbon material but it takes so much effort and time to make them it isn't feasible.
Nanobot assemblers promise to allow us to reorganise matter atomically.
You would still need carbon atoms but they exist in plentiful quantities all over the planet.
All the nanobots would need to do is isolate and stitch them together.
The future is going to get really interesting...

Sci-Fi Scifi To Science: "Aura" Cloak by THEUNSEEN Might Be Possible...