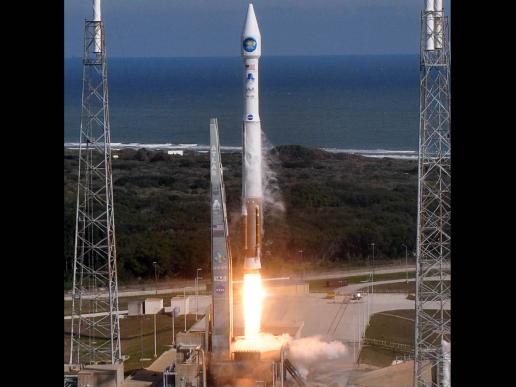 NASA's Solar Dynamics Observatory, SDO, launched aboard a United Launch Alliance Atlas V from Space Launch Complex-41 at 10:23 a.m. EST on Thursday, Feb. 11, 2010. SDO is the first satellite of NASA's Living with a Star (LWS) program. From its geosynchronous orbit, SDO will point its instruments at the sun, conducting groundbreaking research that is expected to reveal the sun's inner workings by constantly taking high resolution images, collecting readings from inside the sun and measuring its magnetic field activity. This data is expected to give researchers the insight they need to eventually predict solar storms and other activity on the sun that can affect spacecraft in orbit, astronauts on the International Space Station and electronic and other systems on Earth. Image Credit: Pat Corkery/United Launch Alliance (More at NASA Picture Of The Day)