Space Seeing Eye-to-Eye on How to Fly 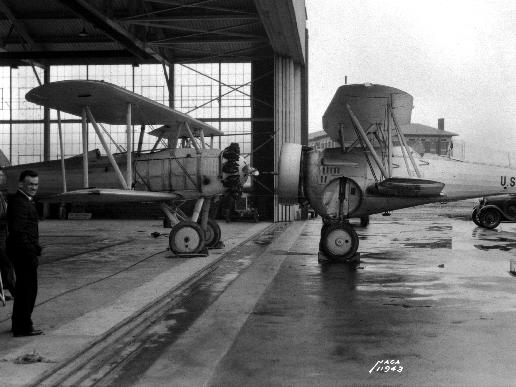 The National Advisory Committee on Aeronautics, or NACA, which celebrates its 95th anniversary on March 3, provided the nation's earliest research and helped develop important technologies, as well as knowledge of flight safety and efficiency. NASA adopted many of these research techniques and many of the places in which to do it, like wind tunnels and entire research centers, from the NACA. Engine cowlings to cover propellers and a series of proven air foil shapes for aircraft wings--both of which reduced drag and improved speed and efficiency--were chief NACA contributions subsequently adopted by every aircraft of the day and improved upon over the decades. This image shows NACA chief test pilot Melvin Cough outside a hangar at the Langley Memorial Aeronautical Laboratory. The test vehicle on the right is a Curtiss BF2C-1 Goshawk, which was used by the U.S. Navy in the early 1930s and featured retractable landing gear. Image Credit: NACA (More at NASA Picture Of The Day)

Space Eyes on the Prize