NASA Picture Of The Day
Skirting an Obstacle 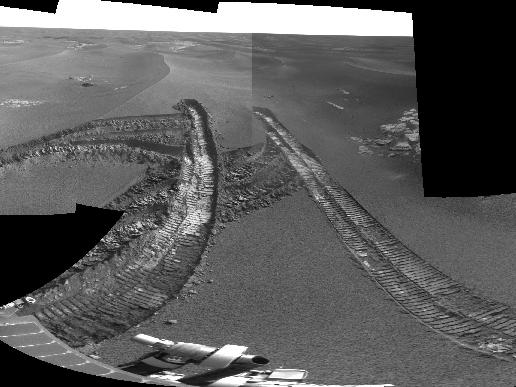 This view from the navigation camera on NASA's Mars Exploration Rover Opportunity shows tracks left by backing out of a wind-formed ripple after the rover's wheels had started to dig too deeply into the dust and sand of the ripple. The frames combined into this view were taken on the 1,867th Martian day, or sol, of Opportunity's mission on Mars (April 25, 2009). The scene spans 120 degrees, from southeastward on the left to westward on the right. Two sols earlier, Opportunity drove 310 feet south-southwestward before stopping when the rover detected that its wheels were slipping more than the limit that engineers had set for the drive. That Sol 1865 (April 23, 2009) drive created the tracks that enter this scene from the left and ended with wheels on the left side of the rover partially embedded in the ripple. On Sol 1866, Opportunity began to back away from this potential trap, but moved only about 11 inches. On Sol 1867, the rover backed up 12 feet before taking this picture. Subsequently, Opportunity proceeded on a path avoiding the ripple where the wheel slippage occurred. For scale, the distance between the parallel wheel tracks is about about 40 inches). This view is presented as a cylindrical projection with geometric seam correction. Image Credit: NASA/JPL-Caltech (More at NASA Picture Of The Day)