NASA Picture Of The Day
Smoke over Western Russia 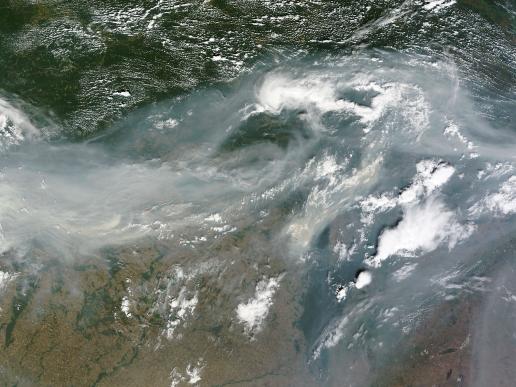 Hundreds of fires burned across western Russia on August 2, 2010, but it is the smoke that conveys the magnitude of the disaster in this true-color image from the Moderate Resolution Imaging Spectroradiometer (MODIS) on NASA’s Terra satellite. Dense gray-brown smoke extends across the width of this image, a distance of about 1,700 kilometers (1,000 miles). The smoke clearly continues both east and west beyond the edge of the image, and is visible in both previous and successive orbits of the Terra satellite. The smoke is so thick that it is not possible to see the ground beneath it. Image Credit: NASA/MODIS Rapid Response (More at NASA Picture Of The Day)