NASA Picture Of The Day
Snapshot of the International Space Station 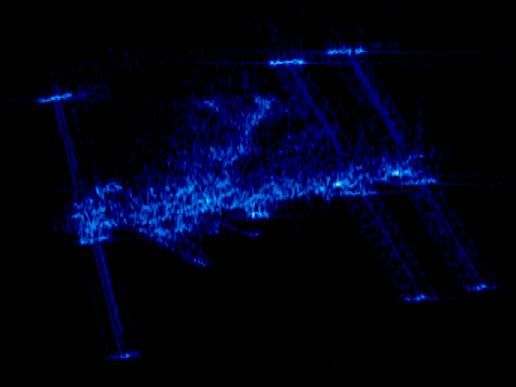 On March 13, 2008, the International Space Station passed across the field-of-view of Germany's remote sensing satellite, TerraSAR-X, at a distance of 195 kilometers, or 122 miles, and at a relative speed of 34,540 kilometers per hour, or more than 22,000 mph. In contrast to optical cameras, radar does not 'see' surfaces. Instead, it is much more aware of the edges and corners which bounce back the microwave signal it transmits. Smooth surfaces such as those on the station's solar generators or the radiator panels used to dissipate excess heat, unless directly facing the radar antenna, tend to deflect rather than reflect the radar beam, causing these features to appear on the radar image as dark areas. The radar image of the station therefore looks like a dense collection of bright spots from which the outlines of the space station can be clearly identified. The central element on the station, to which all the modules are docked, has a grid structure that presents a multiplicity of reflecting surfaces to the radar beam, making it readily identifiable. This image has a resolution of about one meter (about 39 inches). In other words, objects can be depicted as discrete units--that is, shown separately--provided that they are at least one meter apart. If they are closer together than that, they tend to merge into a single block on a radar image. Since this image as taken, the station has expanded and is more than 90 percent complete, including a full complement of solar arrays. Image Credit: DLR (More at NASA Picture Of The Day)