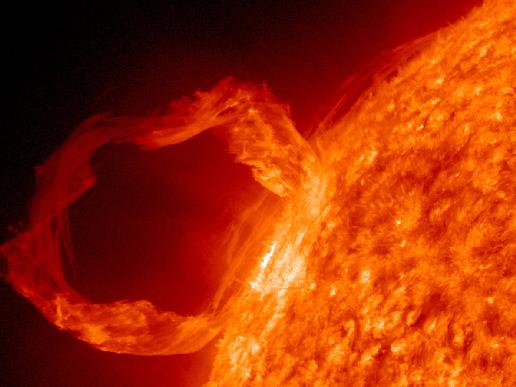 This new image from the Solar Dynamics Observatory’s Atmospheric Imaging Assembly (AIA) shows in great detail a solar prominence taken from a March 30, 2010 eruption. The twisting motion of the material is the most noticeable feature. Launched on Feb. 11, 2010, SDO is the most advanced spacecraft ever designed to study the sun. During its five-year mission, it will examine the sun's magnetic field and also provide a better understanding of the role the sun plays in Earth's atmospheric chemistry and climate. Since launch, engineers have been conducting testing and verification of the spacecraft’s components. Now fully operational, SDO will provide images with clarity 10 times better than high-definition television and will return more comprehensive science data faster than any other solar observing spacecraft. Image Credit: NASA/SDO/AIA (More at NASA Picture Of The Day)

Space A Solar Prominence from SOHO