NASA Astronomy Picture Of The Day
Solstice at Newgrange 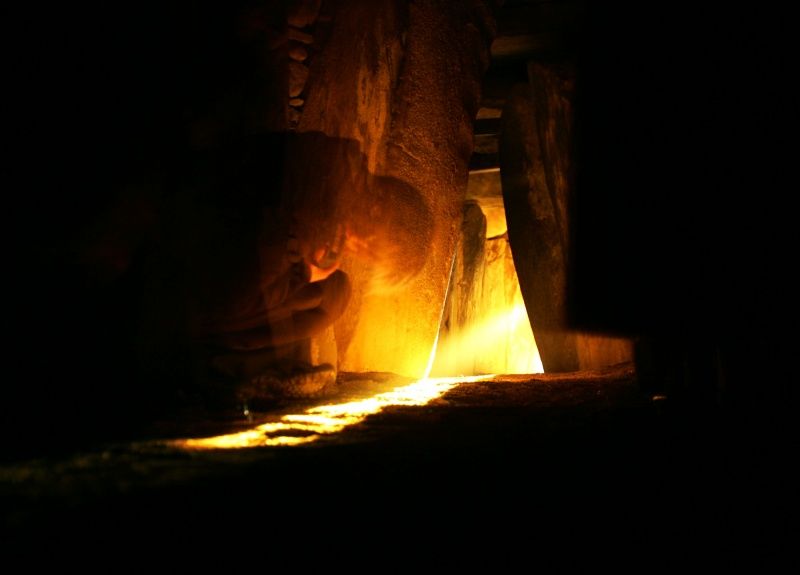 Solstice at Newgrange
Credit: Photograph by Cyril Byrne - courtesy of The Irish Times

Explanation: Tomorrow's solstice marks the southernmost point of the Sun's annual motion through planet Earth's sky and the astronomical beginning of winter in the north. In celebration of the northern winter solstice and the International Year of Astronomy 2009, you can watch a live webcast of the the solstice sunrise from the megalithic tomb of Newgrange, in County Meath, Ireland. Newgrange dates to 5,000 years ago, much older than Stonehenge, but also with accurate alignments to the solstice Sun. In this view from within the burial mound's inner chamber, the first rays of the solstice sunrise are passing through a box constructed above the entrance and shine down an 18 meter long tunnel to illuminate the floor at the foot of a decorated stone. The actual stone itself would have been directly illuminated by the solstice Sun 5,000 years ago. The long time exposure also captures the ghostly figure of a more modern astronomer in motion. To watch the live webcast follow the indicated link below. The webcast is planned to go live at 0830 coordinated Universal Time (for example, at 3:30am Eastern Time in the US) tomorrow, Sunday, the 21st.
Webcast of the solstice sunrise from Newgrange.