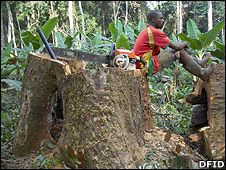 Plans to use a state-of-the-art camera onboard a satellite to monitor deforestation levels in Africa's Congo Basin have been unveiled.
The high resolution RALCam3 camera, designed and built by UK scientists, will provide the first detailed view of the area's rate of forest cover loss.
The project is part of the Congo Basin Forest Fund, a Â£108m joint-initiative by the UK and Norwegian governments.

The fund aims to curb climate change by preventing deforestation in the region.

Speaking at the launch of the scheme, UK Prime Minister Gordon Brown said: "We are pledging to work together to secure the future of one of the world's last remaining ancient forests.

"Preserving our forests is vital if we are going to reduce global emissions and tackle climate change."

Ecological hotspot
The Congo rainforest is the second largest in the world, containing more than a quarter of the planet's remaining tropical rainforest. 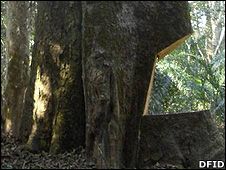 It is also home to more than 50m people, and supports an estimated 10,000 plant species, 1,000 types of birds and 400 different kinds of mammals.
A UN study warned that unless action was taken to tackle deforestation in the region, more than 66% of the rainforest would be lost by 2040.

The high definition camera will be made by a team at the UK's Rutherford Appleton Laboratory (RAL).

"RALCam3 will provide 10-metre per pixel ground sampling from an orbit of 650 km (400 miles) altitude," he told BBC News.

"The image [width] is 88km (55 miles) thereby enabling large areas of the terrain to be imaged in one satellite pass."

Dr Waltham said the system would also have other applications, including surveillance of environmental change and offshore pollution.

The camera is one of the first projects to be supported by the fund, which is headed by former Canadian Prime Minister Paul Martin and Nobel Peace Prize winner Wangari Maathai.

"The Congo Basin Forest Fund is a joint response to a global problem whereby an innovative and consensual mechanism has been embraced," Ms Maathai explained.
"It involves various partners committed to preserve and protect one of the most unique ecosystems in the world."

This article is from the BBC News website. © British Broadcasting Corporation

Robbie said:
The fund aims to curb climate change by preventing deforestation in the region.
Click to expand...

And how, exactly will monitoring the eroding rainforest aid in it's preservation?

LOL, this is old news too

skwirlinator said:
LOL, this is old news too
Click to expand...

Apparently your crystal ball is working better than mine today.

It was in a Red Orbit report about a week ago and it grabbed my attn because of the potential of finding lost ruins and cities.

BTW, I shine that darn ball everyday - It better be working good or it goes back in the pool table!