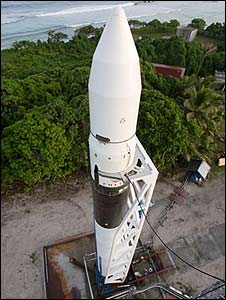 A private rocket carrying three satellites, including a Nasa space sail, has failed to reach orbit.
It is the third unsuccessful launch attempt for the Falcon 1 rocket, built by private space firm SpaceX.
Two rocket stages failed to separate two minutes, 20 seconds into launch from Kwajalein Atoll in the Pacific Ocean.
Engineers are still investigating the cause of the rocket's failure.
"It was obviously a big disappointment not to reach orbit on this Flight 3 of the Falcon 1," said Elon Musk, chief executive of SpaceX, in a short statement read to reporters.
Mission gap
Mr Musk invested millions of dollars gleaned from the sale of his two internet financial services firms into SpaceX to develop low-cost space transportation.
The Falcon 1 rocket was carrying Trailblazer, a small satellite built by the Pentagon, as well as a mini-laboratory called PreSat and a 10 sq m "solar sail" - both of which were built by Nasa.
The incident comes on the heels of two Falcon 1 launch attempts that fell short of orbit.
The first launch in March 2006 ended with a fuel line leak and a fire caused by a corroded nut.
During the second attempt in March 2007, the rocket reached 289km (180 miles) above Earth and nearly achieved orbital velocity before the rocket's second stage engine shut down because of fuel slosh and roll-control issues.
On Saturday, SpaceX also fired its Falcon 9 rocket, designed to ferry cargo and astronauts to the International Space Station (ISS).
The demonstration in Texas meets a target laid down by Nasa, which has given SpaceX some "seed" funding.
Nasa hopes the Falcon 9 can help fill the mission gap that will exist while it develops a successor to the shuttleThis article is from the BBC News website. © British Broadcasting Corporation