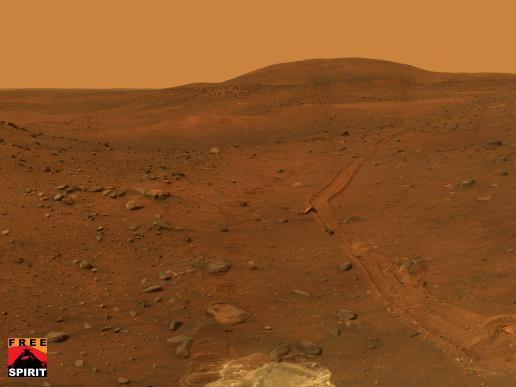 This view from the panoramic camera on NASA's Mars Exploration Rover Spirit shows the terrain surrounding the location called "Troy," where Spirit became embedded in soft soil during the spring of 2009. The hundreds of images combined into this view were taken beginning on the 1,906th Martian day (or sol) of Spirit's mission on Mars (May 14, 2009) and ending on Sol 1943 (June 20, 2009). Near the center of the image, in the distance, lies Husband Hill, where Spirit recorded views from the summit in 2005. For scale, the parallel tracks are about 1 meter (39 inches) apart. The track on the right is more evident because Spirit was driving backwards, dragging its right-front wheel, which no longer rotates. The bright soil in the center foreground is soft material in which Spirit became embedded after the wheels on that side cut through a darker top layer. The composition of different layers in the soil at the site became the subject of intense investigation by tools on Spirit's robotic arm. In recent weeks, Engineers have been using test rovers on Earth to prepare for extracting the sand-trapped Spirit rover. While amnesia-like symptoms in recent days might delay the start of planned drives by Spirit geared towards extricating it, the Mars Exploration Rover team remains hopeful. "If they are intermittent and infrequent, they are a nuisance that would set us back a day or two when they occur. If the condition becomes persistent or frequent, we will need to go to an alternate strategy that avoids depending on flash memory, " said Project Manager John Callas of NASA's Jet Propulsion Laboratory. In these amnesia events, Spirit fails to record data from the day's activities onto the type of computer memory -- non-volatile "flash" memory -- that can retain the data when the rover powers down for its energy-conserving periods of "sleep." Spirit has worked on Mars for more than 69 months in what was originally planned as a three-month mission. (More at NASA Picture Of The Day)

Water Is The Original Alien Soup

NASA: Before the Winter