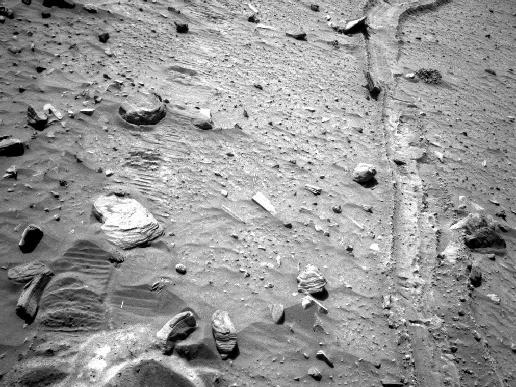 This view from the navigation camera near the top of the mast on NASA's Mars Exploration Rover Spirit shows the tracks left by the rover as it drove southward and backward, dragging its inoperable right-front wheel, to the location where the rover broke through a crust in April 2009 and became embedded in soft sand. The rover team's strategy to extricate Spirit from the sand trap was to follow these tracks out, heading north. Spirit took this image during the 2,092nd Martian day, or sol, of the rover's mission on Nov. 21, 2009. For scale, the distance between the right and left wheel tracks is about 3 feet. The rover team began commanding extrication drives in November after months of Earthbound testing and analysis to develop a strategy for attempting to drive Spirit out of this soft-soil site, called "Troy." Image Credit: NASA/JPL-Caltech (More at NASA Picture Of The Day)