I like the premise of removing episodes from your life that are harmful to your psyche. But is this drug going to be kept in safe keeping?

I don't think the drug they are creating will be used as a simple swallowing to remove memories. The tests are constructed to play videos and images to people of the things they are having problems with, to lessen the panic effect.

So, we aren't likely to see nefarious uses from the drug, covering up crimes against persons. Or being able to erase the memories of a bad relationship!


A drug which appears to erase painful memories has been developed by scientists.
The astonishing treatment could help sufferers of post-traumatic stress disorder and those whose lives are plagued by hurtful recurrent memories.
But British experts said the breakthrough raises disturbing ethical questions about what makes us human.
They also warned it could have damaging psychological consequences, preventing those who take it from learning from their mistakes. 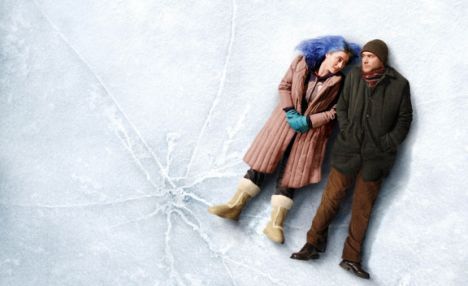 Kate Winslet and Jim Carrey starred in Eternal Sunshine Of the Spotless Mind - which saw the couple use a technique to erase painful memories of each other
Dr Daniel Sokol, a lecturer in medical ethics at St George's, University of London, said: 'Removing bad memories is not like removing a wart or a mole. It will change our personal identity since who we are is linked to our memories.
'It may perhaps be beneficial in some cases, but before eradicating memories, we must reflect on the knock-on effects that this will have on individuals, society and our sense of humanity.'
Dutch researchers claim to have erased bad memories by using 'beta-blocker' drugs, which are usually prescribed to patients with heart disease. 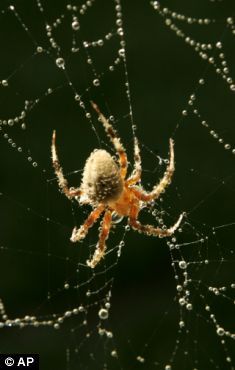 The drug could erase frightening memories - such as spider phobia

Experiments on animals had already shown that the drugs - beta-adrenergic receptor blockers - can interfere with how the brain makes and remakes memories of frightening events.
In the latest study, Dr Merel Kindt of Amsterdam University tested the drugs on 60 men and women.
His team created fearful memories in volunteers by showing them pictures of spiders while giving them gentle electric shocks.
The volunteers were urged to 'actively remember' the images, creating a strong negative association between spiders and discomfort.
The following day the volunteers were split into two groups. One was given the beta blocker and the other a placebo pill before both were shown the same spider pictures.
The researchers recorded the level of fear in the volunteers by playing sudden noises and measuring how strongly they blinked.
A strong startle response showed they were in a fearful state, while a mild response showed they were calm.
The group given the beta blocker had a much weaker fear response than those given the dummy pill, the researchers report in the journal Nature Neuroscience.
A day later - once the drug was out of their systems - their fear response was tested again.
Once more, those given the beta blocker the previous day showed fewer signs of spider phobia, suggesting the memory was completely erased.
Beta blockers appear to work because each time someone recalls a powerful emotional memory the memory is 'remade' by the brain. 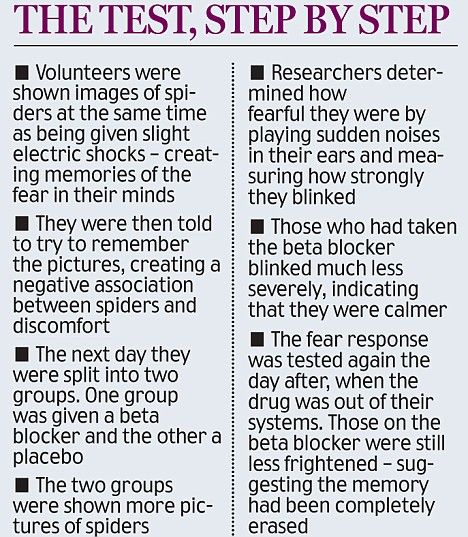 The drug interferes with this re-creation of the stressful memory - and prevents the brain renewing it.
In theory, it could eradicate memories of traumatic events that happened years ago. It might also help patients overcome phobias, obsessions, eating disorders and even sexual hang-ups.
Dr Kindt said: 'Traditionally, therapists seek to teach people with such disorders strategies to build new associations and block bad memories but the problem is the memories remain and people often relapse.'
It could be several years before doctors prescribe the drugs for patients with post-traumatic stress disorder.

The scientists say more tests are needed to confirm the drug's memory- erasing properties. Dr Kindt said: 'The next steps are to look at how long the drug's effects on memory last, and testing the treatment in people who actually are suffering from some kind of disorder or phobia.'
But British experts warned the drug raises some difficult questions.
Professor John Harris, an expert in biological ethics at the University of Manchester, said: 'It is obviously up to the individual whether or not she wishes to risk the possible effects, including psychological discontinuity, of erasing unpleasant memories.
'An interesting complexity is the possibility that victims, say of violence, might wish to erase the painful memory and with it their ability to give evidence against assailants.
'Similarly criminals and witnesses to crime may, under the guise of erasing a painful memory, render themselves unable to give evidence.'
Paul Farmer, chief executive of the mental-health charity Mind, said he was concerned about the 'fundamentally pharmacological' approach to problems such as phobias and anxiety.
He told Channel 4 News that the unintended consequences 'could include the eradication of positive memories'.
Professor Neil Burgess of the Institute of Cognitive Neuroscience told the programme that wide-scale use of the drug was a long way off.
'All they've shown so far is that the increased ability to startle someone if they are feeling a bit anxious is reduced,' he said.
The ability to remove memories has been the stuff of science fiction for decades.
In the film Eternal Sunshine of the Spotless Mind, which starred Kate Winslet and Jim Carrey, a couple used a technique to erase memories of each other when their relationship turned sour.
Click to expand...

Writer
Hey I practically majored in removing memories with drugs 40 years ago.