Oh, they better make this available to Verizon Wireless! I would definitely be the kind of geek that in the middle of a meeting at work to break out my communicator..... :tos_com:

Sandi Isaacs, VP of Interactive at Viacom Consumer Products, which represents Paramount Pictures properties, remarked, "There is a tremendous opportunity to tap into Star Trek fans around the world and offer them a device to interact, connect and download Star Trek entertainment. This not only promotes the Star Trek spirit but creates a new paradigm for the wireless community."

The availability of the Star Trek Communicator Phone signals Sona Mobile's entrance to the entertainment market after almost six years of leading the delivery of wireless content to financial service organizations. The SWP has powered the corporate environment for years and now crosses the entertainment threshold to offer a wide range of telecommunications features to a new audience.

"Sona Mobile has a history of providing the technology necessary to power mobile access to enterprise applications, so this partnership is a natural extension of our product," said Shawn Kreloff, Managing Director of the Entertainment Division. "The Star Trek Communicator Phone is far and away the most technologically advanced, themed mobile device on the market. As the mobile entertainment industry evolves towards delivering multiple media streams at the same time, our Sona Wireless Platform creates a new era of theme phones." The Star Trek Communicator Phone will come equipped with a custom Star Trek faceplate and other themed features unique to the Star Trek franchise. The phone will be available beginning September 30, 2005.
Click to expand...

i found this story a couple of days ago but didn't bother to post it as i cannot find any proposed images of the phone (not that we really need them!)

the phone is a great idea for confirmed trekkies or teenagers, but to be honest i don't think i'd personally want one. i think i'd die on the spot of shame if it went off with a chirp and i flipped it out in company and said : 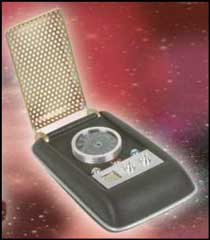 i once had a girlfriend that was a confirmed trekkie, she owned one of these. i used to sit and watch Babylon 5 with her each week, giving up our nights out. amazing times, to actually be able to sit down with a female of the species, watching your favourite scifi programming and not have her gabbing in your ear constantly

Mr Destructo said:
the phone is a great idea for confirmed trekkies or teenagers, but to be honest i don't think i'd personally want one. i think i'd die on the spot of shame if it went off with a chirp and i flipped it out in company and said :

Mr Destructo said:
i once had a girlfriend that was a confirmed trekkie.....
Click to expand...

All I'll say on the subject is that my wife is a Lifetime fan. But she indulges me by giving up the TV every Friday night.