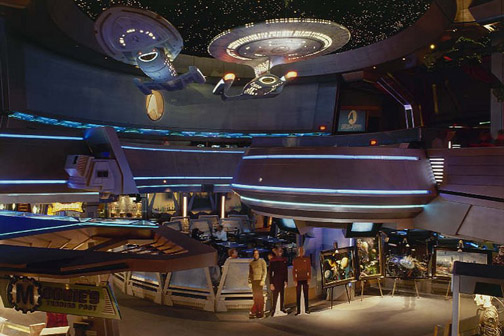 The Star Trek Experience&mdash;that ride at the Vegas Hilton where you used to be able to tour the Enterprise D bridge and ride in shuttlecraft&mdash;is going to reopen next year.

TrekMovie says that the ride will open in phases, with the Vegas mayor claiming that the first phase will even open THIS WEEK, in time for the premiere of the new movie. It closed last year.

The main part of the ride seems to be aimed to open some time in 2010, and follow up the introductory space themed bar and restaurant with stuff from the original series and the new movie.

Instead of the Hilton, however, it will reportedly open at the Neonopolis in downtown. I wish the original was still open, because I would seriously consider having a wedding there. I'd have to find another wife, of course. [Trek Movie via TV Squad - Image Credit]

Staff member
Cool! The Mrs. & I have Vegas on our list of places to visit so the re-opening of the Trek Experience is a welcome event.

Never been to Vegas to see that before it closed but back in the early 90's I was in the museum of natural history in Boulder CO and they had a planeterium like thing where the seats sat back flat and they projected a star trek themed guided tour of the universe onto the domed ceiling. The guided tour was from the deck of the U.S.S. Enterprise. It was so big and low to the floor and high quaility imaging that when they hit the warp drive it made you actually feel like you were moving. It was one of the coolest things I have ever seen. It was kinda like an I-MAX dome with you lying on your back looking up which generated some of the gravitational feeling while the movie played.
Kinda like watching a roller coaster in an I-MAX, anyway, it was pretty danged cool.