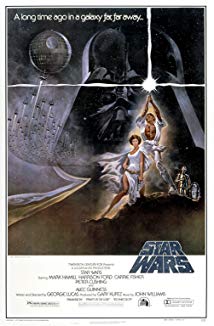 A young boy from Tatooine sets out on an adventure with an old Jedi named Obi-Wan Kenobi as his mentor to save Princess Leia from the ruthless Darth Vader and Destroy the Death Star built by the Empire which has the power to destroy the entire galaxy.

In preparation for the December release of Episode 7 I am rewatching all the episodes in the intended order. Thus this first movie is now the 4th. I searched Alien Soup for a topic dedicated to this one movie but all I found were Star Wars topics that discuss any of the movies. This topic is for discussing ONLY the Original movie and or the 4th movie in the saga. I'm curious of the retrospeculation the new episode will create concerning this original work. If you haven't seen this (why not?) or you don't have a copy to view I found a bluray stream of it on

During the battle, Rebel
spies managed to steal secret
plans to the Empire's
ultimate weapon, the DEATH
STAR, an armored space
station with enough power
to destroy an entire planet.

Pursued by the Empire's
sinister agents, Princess
Leia races home aboard her
starship, custodian of the
stolen plans that can save her
people and restore
freedom to the galaxy....​

Some interesting facts about the movie