A great movie yet that holds up after time. The same can not be said for the TV series that acted as a sequel to the movie. 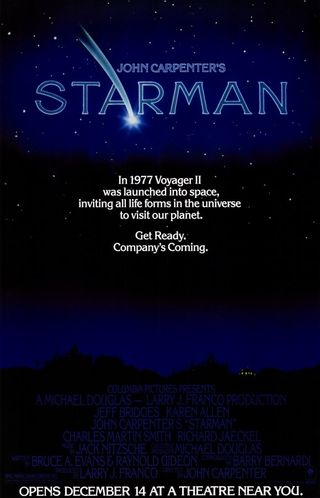 Next Tuesday (Aug. 11), "Starman" will be available for the first time on Blu-Ray. Dennis Lim went back to reevaulate the film and its director, John Carpenter, in this piece from the Calendar section of the Los Angeles Times.

John Carpenter, who has not directed a feature film since "Ghosts of Mars" in 2001, seems to recede further into the margins of American pop culture with each passing year. Even in the more productive phases of his career, he was damned with faint praise, as a B-movie or horror specialist who never matched the promise of his breakthrough film, the slasher landmark " Halloween."

This was not lost on Carpenter, who supposedly once observed that while he's considered an auteur in Europe, "in the U.S., I'm a bum."

This month sees the Blu-ray release of the director's "Starman" ( Sony Pictures Home Entertainment, $28.95) and "Big Trouble in Little China" (20th Century Fox Home Entertainment, $29.99). These two '80s films reinforce the sense of Carpenter as a kind of shadow Steven Spielberg, a deft, sometimes ingenious commercial craftsman who recognized the unpretentious pleasures as well as the subversive potential of genre entertainment but was inevitably eclipsed by that decade's dominant American filmmaker.

Carpenter's "The Thing" (1982), a remake of Howard Hawks' Cold War allegory "The Thing From Another World," opened within weeks of Spielberg's much cuddlier and vastly more popular "E.T.:The Extra-Terrestrial." "Starman" is a transparent stab at atonement, a friendly-alien weepie to file alongside "E.T." and "Close Encounters of the Third Kind."

In response to the invitation of the Voyager space probe, an extraterrestrial being lands in the Midwest, where it assumes human form as a young widow's recently dead husband. After a superbly tense opening sequence, in which Karen Allen's terrified heroine watches her visitor grow from infancy into Jeff Bridges in a matter of seconds, the film settles into the familiar rhythms of a romantic road movie... 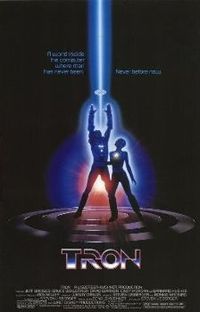 Happy 70th birthday Wes Craven: A look back at 13 of his films

"Exorcist" director William Friedkin on the 13 movies that him

Was 1982 the greatest fanboy summer ever?

Peter Jackson talks about the alienation of "District 9"

Staff member
For those who may not have seen the movie...

they are probably going to remake this too

skwirlinator said:
that was a good movie but I think it should be left alone

they are probably going to remake this too
Click to expand...

Please, no. Let *some* movies from my youth remain as moments in time.

Ok, after a quick look at the remake schedules I have been watching I didn't see it on any lists. Doesn't mean it won't be - just isn't right now.
H

Starman is a great movie that I can still sit and watch anytime it is on. Besides Indiana Jones, it is Karen Allen's only other good role.

I still haven't seen this movie and I like John Carpenter flicks. I was going to pickup the newly released Blu-Ray release but I can't seem to find it for a good price.

LeRolls said:
I still haven't seen this movie and I like John Carpenter flicks. I was going to pickup the newly released Blu-Ray release but I can't seem to find it for a good price.
Click to expand...

You may want to catch it as a rental first before adding it to your collection. The reason being is that, depending on your perspective, it is either an interesting sci-fi movie or a romance movie.

Kevin said:
You may want to catch it as a rental first before adding it to your collection. The reason being is that, depending on your perspective, it is either an interesting sci-fi movie or a romance movie.
Click to expand...

Maybe I'll rent it from Netflix first.
B

Starman is a great movie.

It went down to $12.99 for the Blu-Ray version on Amazon so I went ahead and ordered it.