The taz'aran officer was a second lieutenant. It never crossed his mind, that someday he would be captured by a Terran. The officer woke up tied to a metal chair, mouth parched and with splitting headache to boot. Before him and under the shade of one of those local trees, was resting a tall, bulky human. Strangely dressed, he had no armor or helmet. Instead, he wore exotic looking dark leather clothes, that were laced with mega-steel pieces. The man had his jacket resting on the handles of his bike and he could examine the colors on its back. It was a stylized dark-feathered bird with long beak in the center, wings spread and blood dripping claws. The circle surrounding it had some words written in a human language he knew nothing of, but the bird! This human was part of that infamous gang – the brotherhood of the dark bird or something. He tried licking his lips and looked down, suddenly realizing that something was wrong with his legs. The taz'aran screamed – his feet were naked and lightly slashed by a blade, blood dripping on the ground. A puddle of smelly pinkish blood was getting bigger, his vision dimmer and breathing harder. The human stood up and walked towards him. He had only a thin shirt to protect his torso from the sun. Old, made of some white cloth, it had a strange yellow circular face with wide open white eyes and a toothy grin. Confused the taz'aran tried to talk but was kicked straight in the face. Spitting blood and teeth the chair he was tied to fell backwards, his head hitting the ground.
“Shiteater, you gots only a couple of minutes left. The felgercarb smelling blood will soon leave your meat sack. I don't have to tell you how good your kinds' death from blood loss feels. Nod if you understand!”
He got another boot to the head before nodding. The Terran effortlessly picked him up from the ground and leveled his face with his.
“And now assface, you will effin' tell me, why were you here and what happened with the rest of those colonists!”
“I..I don't know anything, you hear me! Stupid huma..” he got another boot to the face. More of his bloodied teeth rolled on the ground.
“Listen to me you felgercarb-mouth, I'll have to spend precious and not-so-nice minutes of my time, cleaning me boots from that felgercarb running in your veins. The smell is always a killjoy. Start talking and I might let you use this” and the human produced a medi-spray from his pants front pocket.
“Ugh...you filthy scum! Even if I tell you what you need to know, what could you possibly do all by yourself?! You have no friends because we've killed all of them! Ahahahahah!” He got kicked in the gut and choked for air, then vomited what was left in his belly all over his feet.
“Hmmm, vomiting all over those slashed feet of yours. In this climate and heat, I imagine that infection will soon be spreading in your shitstream,” he dangled the medi-spray before his face “You still have time to reconsider.”
“Good! I will tell you what you want to know, and only because it will get you killed, you stupid human! Yes, some colonists were taken alive and loaded on one of our cargo ships. All that I know is – they were supposed to make a stop at Pion base. Only some thirty two light years away from this scorched hell hole! Why were we here you ask? For the glory of the Taz'aran Empire of course! Capturing this place and turning it into a military outpost deep inside your territory – is that enough for you human filth?”
The human smiled and walked over to his bike and put his jacket on slowly. He looked at the medi-spray still in his hand and then at him. Sighted heavily.
“You know what crapblood, a promise is a promise. I told you that I'll let you use this if you answered me questions and I am a man of my word” the human dropped the medi-spray on the ground and walked away mounting his bike. The life-saving spray was a good thirty feet away from him and he was still tied to the chair!
“Filthy human! Once I get myself free and heal, all of your stupid colonies will BURN!!!” – he screamed enraged and tried moving his chair closer to the medi-spray – “Your genetically deficient clients will all die together with you, dumb humans! We will make toys for our children from the bones of yours!” – he suddenly lost balance and fell to the ground. The puddle of blood was getting larger, and he furiously strained his limbs to the max, trying to break the chair or at least rip the ropes. Both were sturdy and he failed. That human calmly turned on the engine of his bike and revved it a couple of times.
“Ya' know what? All that kicking and straining just shortened what's left of your time. See that puddle – it is getting bigger.” he smiled and continued “I forgot to tell you something else. Farmers here had to deal with some alien invasive species of rat-like creatures. They say them buggers love eating the roots of those trees, vegetables and...can smell blood from miles away.”
The officer's eyes widened because he knew what that human was talking about. The wozzies were native to Taz'ara, considered a pest, many special agents deployed considerably sized populations of then on Terran frontier colonies. The idea was to undermine and disrupt their farming and ideally starving the Terrans to death. He saw a group of six wozzies closing. Their heads were up, noses sniffing the air and they looked hungry...


Mack slowly rode his bike away, while listening to the desperate, dying screams of the taz'aran officer. He, of course, had recorded everything on his PDA. Someday, some morale officer would pay good creds for that recording. His glasses had helped him see something in the distant sky – it was a heavy shuttle descending through the atmo on a short vector. Piloted by somebody very, very good. And the ship was unmistakably Spacer by design. Strangely looked like an effin' frog to him. Mack spat and increased his speed – he had something to trade for fuel and supplies. Whomever this ship belonged, they were Terrans and he could peddle info concerning abducted people easy. Had his crew were still alive and kicking, they would've assaulted that Pion base themselves. Kill everybody who was not Terran. Then loot everything not bolted to the floor-plating. Cut said plating with plasma torches and drag it away for scrap too. As angry as Mack was, he was not an idiot. Even though he was somewhat of a lone wolf all his adult life, he had his brothers. Now he had to work with others. Temporary, but a much-needed arrangement. Mack only hoped they had no lawmen on board.
He looked at the two Colt model M69 Exterminator railgun pistols resting on his belt. Those spewed 3mm projectiles at one half the speed of light. Power packs were good for twelve shots before slagging. In a hardpoint on the right side of his bike, and connected via plasma cable with its power core, was Mack's main gun – a highly modified and overpowered anti-tank rifle. The beastly weapon fired undo-steel slugs, who made of an alloy much stronger than the already super tough mega-steel, and ignored most vehicle armor like it wasn't there at all. He had a whole case of those in his GAV's cargo hold. Mack kept many other weapons there too, but for now, his pistols would be enough. Alberto's bloodied shovel was tied at the back of his chopper – Mack intended to use its blade to bloody butcher all of them taz'aran crapbloods he'd soon meet. The chopper's loud, whistling Tesla engine, echoed in the air while he left the ruins of Murphy's Landing...
Last edited: Feb 12, 2018 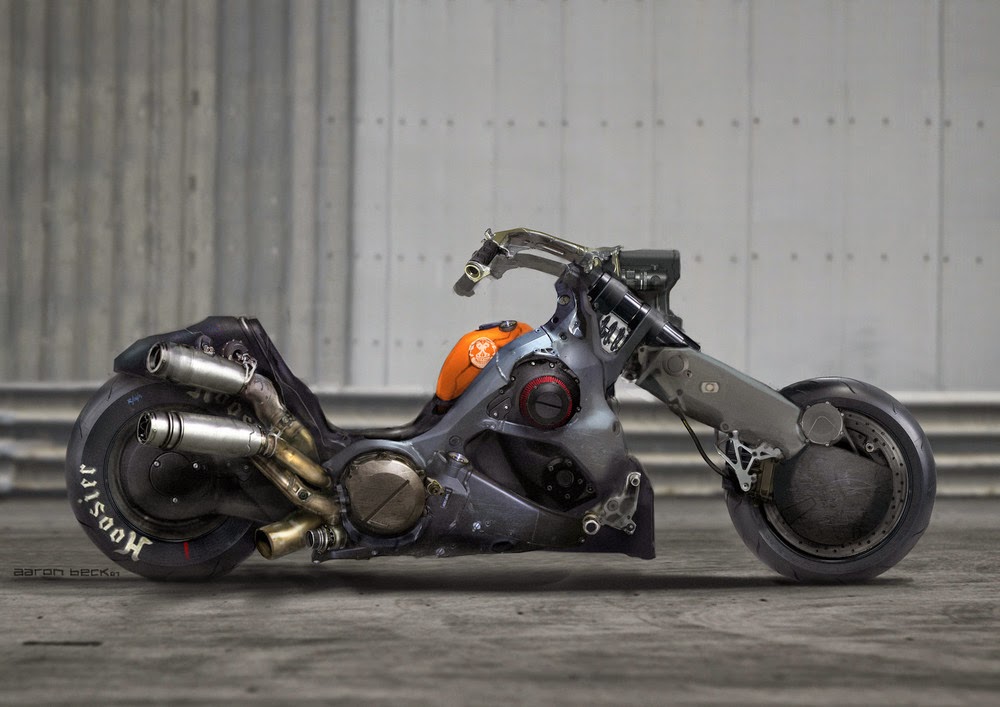 I like the industrial look of the bike and your avatar suit.
Just a taste of steam punk with the pipes.
The shrouding is very effective.
Do you have a pic with Mack on the bike?
In assault configuration?

Tom said:
I like the industrial look of the bike and your avatar suit.
Just a taste of steam punk with the pipes.
The shrouding is very effective.
Do you have a pic with Mack on the bike?
In assault configuration?
Click to expand...

Sadly my budget, for now, does not allow me to order more art. If I had more exposure and readers everything is possible And that is a stock picture I found that looked 90% close to what I envisioned for Mack! The weapons are deadly as hell too. You should check the other exert I posted here about that Kil'ra morale officer. My book has all the goodies:https://www.amazon.com/dp/B079K62S78

What kind of gas is ran in that motor? 91' octane or higher? That bike looks bad to the bone!!!!

sci-fi-dude said:
What kind of gas is ran in that motor? 91' octane or higher? That bike looks bad to the bone!!!!
Click to expand...

It has a portable Fusion core and the engine is original H&D Tesla "Smooth coil" 4500hp. Everything runs on electricity, since in my Universe Nikola Tesla actually managed to succeed with all of his business ventures. Edison died in poverty after getting out of prison. In the center of Berlin, there is one giant statue of Nikola Tesla holding the globe. In it, there is one huge fusion core that provides wireless power to all of the planet.

Tom said:
I like the industrial look of the bike and your avatar suit.
Just a taste of steam punk with the pipes.
The shrouding is very effective.
Do you have a pic with Mack on the bike?
In assault configuration?
Click to expand...

This image is pretty close to what I had in mind when conceptualizing the character and his weapon loadout. Every single one of my characters has a specific weapon and combat tactics. Also, I am wondering what can you say after reading my first book? You like it I hope 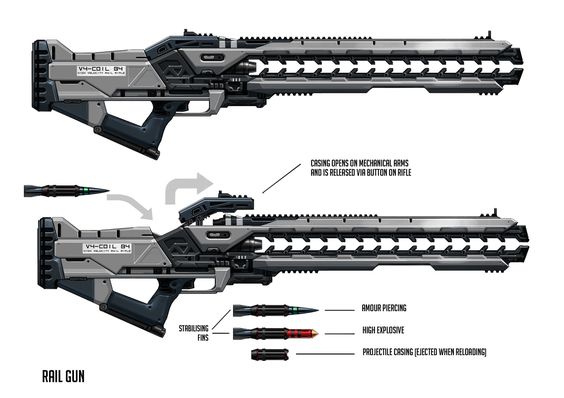 Beyond the Barrier by Damon Knight