NASA Picture Of The Day
Successful Flight Through Enceladus Plume 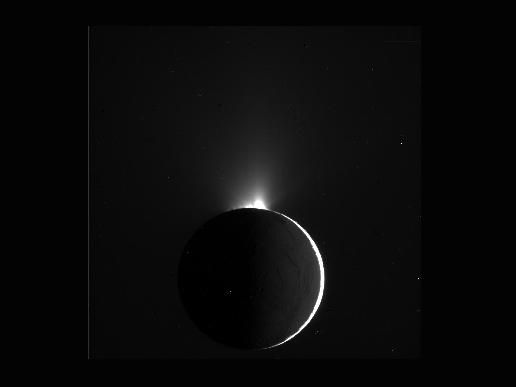 The Cassini spacecraft has weathered the Monday, Nov. 2, 2009, flyby of Saturn’s moon Enceladus in good health and has been sending images and data of the encounter back to Earth. Cassini had approached Enceladus more closely before, but this passage took the spacecraft on its deepest plunge yet through the heart of the plume shooting out from the south polar region. Scientists are eagerly sifting through the results. In this unprocessed image, sunlight brightens a crescent curve along the edge of Saturn's moon Enceladus and highlights its misty plume. The image was captured by Cassini's narrow-angle camera as the spacecraft passed about 190,000 kilometers (120,000 miles) over the moon. This image has not been validated or calibrated. A validated/calibrated image will be archived with the NASA Planetary Data System in 2010. At its closest point on Nov. 2, Cassini flew about 100 kilometers (60 miles) above the surface of Enceladus. Since the discovery of the plume in 2005, scientists have been captivated by the enigmatic jets. Previous flybys detected water vapor, sodium and organic molecules, but scientists need to know more about the plume’s composition and density to characterize the source, possibly a liquid ocean under the moon’s icy surface. It would also help them determine whether Enceladus has the conditions necessary for life. Mission managers did extensive studies to make sure the spacecraft could fly safely through the plumes and not use an excessive amount of propellant. Image Credit: NASA/JPL/Space Science Institute (More at NASA Picture Of The Day)