A friend of mine went to the Summer of Sonic video game convention in London yesterday. It was a tightly subscribed gathering with 200 people.

Richard Jacques, Lee Brotherton, TJ Davis Performance
Main Stage: Legendary music composer Richard Jacques will stage a very special performance for attendees of the Summer of Sonic convention, teaming up with Dreams of an Absolution star Lee Brotherton and re-uniting with Sonic R vocalist, TJ Davis. Richard will perform many SEGA classics on the piano including Outrun, Shenmue and of course, many favourites from Sonic the Hedgehog, Sonic R, Sonic 3D and more. Included will be an exclusive rendition of Dreams of an Absolution with Lee Brotherton, a duet with TJ and LB, plus a few secret surprises.

The Summer of Sonic is a free-to-attend event for Sonic the Hedgehog fans to meet up, have fun and enjoy playing games together. Sonic the Hedgehog is a computer game franchise that began in 1991 on the SEGA Mega Drive console, and has become an international phenomenon ever since. Today, kids and adults who grew up with the series enjoy games, cartoons, comics, music CDs and an assortment of merchandise.
On 9th August 2008, there will be a place where the Sonic Community can come together and chat about their favourite hedgehog, read comics, listen to defining music in the series, play the latest Sonic games and win awesome prizes!
Much in the same vein as the original Summer of Sonic website that launched in 2006, where everyone was invited to contribute to a community portal, this year’s event invites fans from all over Britain (and beyond - some fans are coming from as far as Australia!) to form the first ‘convention’ for SEGA’s mascot. Everything from the fanbase to official products will be covered, so feel free to bring your artwork, computers, website details or other creations and merchandise to show to everyone!
Here’s some information on what will be at the event:
Games

Play Sonic the Hedgehog video games, from the original 1991 classic to the most recent titles - with a few surprises thrown in for good measure! Two televisions will be hooked up to past and modern games consoles so you can enjoy a broad range of Sonic’s gaming past, while a huge projector screen by the Stage will be used for Sonic 2 contests and other tournaments throughout the day!

As with any important video game fanbase, the Sonic the Hedgehog community take to creating many different things in the hero’s name. Be it artwork, video, cartoons, comics or even their own figures or baked cakes, Sonic fans truly are the most dedicated and versatile artists out there. Showcase your artistic talent in our Artwork Zone.

The Summer of Sonic hall will include a stage, which will set the scene for many different attractions throughout the day. Here are some of the events that will happen on stage (times not yet confirmed).

Meeting up with a few friends from a forum she jointly runs about gaming and creativity, she had decided to go cosplaying as Dr.Robotnik.

She tailored her clothes, shaved her head, acquired accessories in the form of goggles, gloves and stick on handmade mustache (not made from two foxes tails!) 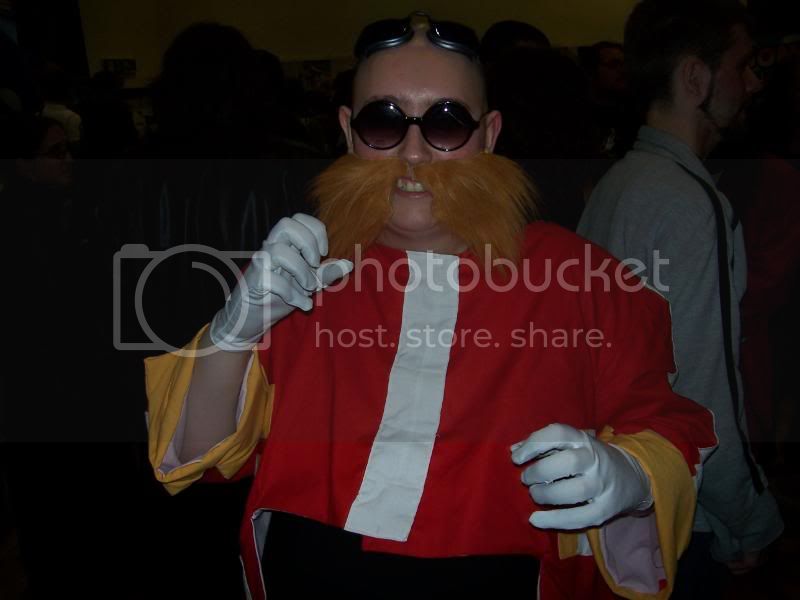 and whilst she was there she of course got dragged up front to be interviewed in front of the whole convention and presented with some gifts to take away for her trouble.


She tried to spiel off some lines from the games Dr. Robotnik says, but was too nervous. The crowd apparently then chimed in with quotes.


This took a lot of courage and it paid off in dividends. She reckons it was the best day of her life!

And we have a follow up vid, in character!