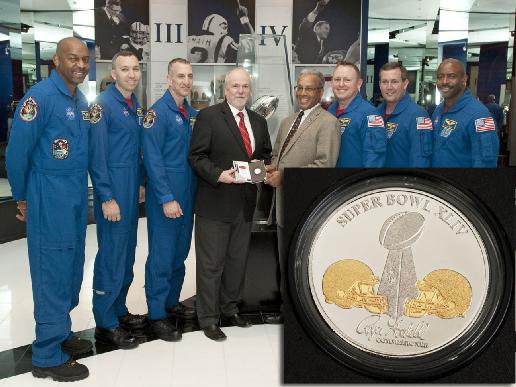 Members of the STS-129 shuttle mission present a specially minted silver medallion to National Football League officials on Wednesday, Jan. 27, 2010, at the Pro Football Hall of Fame in Canton, Ohio. The coin, which was flown in space during the November flight of Atlantis, will be used for the official coin toss prior to the kickoff of Super Bowl XLIV on Sunday, Feb. 7, 2010. One member of Atlantis' crew, Leland Melvin, was drafted by the NFL's Detroit Lions in 1986. The crew also flew other NFL-related memorabilia, including jerseys and a football inscribed with the name of every member of the Hall of Fame. From left: Astronauts Bobby Satcher, Randy Bresnik, and Charlie Hobaugh; Joe Horrigan, Vice President of Communications/Exhibits for the Pro Football Hall of Fame, Steve Perry, President/Executive Director of the Pro Football Hall of Fame; astronauts Berry Wilmore, Michael Foreman and Leland Melvin. Photo Credit: NASA/Marv Smith (More at NASA Picture Of The Day)