Has anyone else heard of this movie? I think it's gonna to be crazy good. I haven't read the graphic novel that it was based on yet, but I did check out the prequel of it called Flesh and Bone and I'm already hooked! It sounds like it'll be kind of Blade Runner-ish, which I definitely do not have a problem with!

The teaser premiered at Comic Con a couple weeks back so I really can't wait to see it: http://www.superherohype.com/news/topnews.php?id=8063

Staff member
I had not heard of it before so I did a quick Google search for a description....


Variety Magazine said:
Bruce Willis will star in “The Surrogates,” a sci-fi thriller that Jonathan Mostow will direct for Disney. The studio is eyeing a February production start in Boston. A Willis deal comes just as United Artists unplugs “Pinkville,” the My Lai massacre drama in which Willis was going to star for director Oliver Stone next month.

Michael Ferris and John Brancato scripted “The Surrogates” based on a graphic novel from Top Shelf Comix. They collaborated with Mostow on the last film he directed, “Terminator 3: Rise of the Machines.” The scribes also wrote “Terminator Salvation: The Future Begins,” the Halcyon-financed sequel that McG will direct at Warner Bros. (Daily Variety, Oct. 10).

“The Surrogates” is being produced by Mandeville’s David Hoberman and Todd Lieberman, along with Max Handelman and Elizabeth Banks.

Story is set in the near future, where humans live in isolation and interact vicariously through surrogate robots who are better-looking versions of themselves. Willis plays a cop who, through his surrogate, investigates the murders of others’ surrogates. The cop is forced to venture from his own home for the first time in years and unravels a conspiracy.
Click to expand...

Thanks for posting that! Clears up the whole plot

Also, nice that Jonathan Mostow is directing. I feel like I'm in the minority, but I loved T3 - so it seems like he's continuing in the direction of the sci-fi thriller (complete the the robots). I'm definitely curious to see the look of the movie now!

Staff member
I realized that a sentence or two from my original reply is missing. Weird. I must've been doing it at 3:00 AM again. I really should know better.

My thought process was that I'll watch it to see what Bruce Willis does with the character. He has done some good work with sci-fi/fantasy genre films in the past, so it'll be interesting to see if that continues. [Yes, I admit it... 5th Element is a guilty pleasure movie that I will watch whenever it's on TV.

Looking back, I don't think T3 was that bad of movie. I think casting Kristanna Loken and an aging Schwarzenegger was a stunt casting move, but the plot itself wasn't bad. The final scene, of Connor in the protected mountain while the war starts, is the real heart of the movie.
D

I'm definitely interested in seeing how both Mostow and Willis interpret this graphic novel - seems like they've both had success in the sci-fi/fantasy thriller genre so seems like a natural fit to work together. I prefer Bruce Willis in these types of roles too (I too enjoy 5th Element as well as 12 Monkeys and of course, Die Hard - though that's just plain action and not sci-fi). He seems to be more in his element when the fate of the world is in his hands, no?
D

Sorry for the bump but just wanted to share this teaser poster that recently made the internet rounds. Kind of sneaky in that it's actually for the company in the movie that creates the Surrogates. It also directs you to the website, where you can actually make your own surrogate. Pretty clever, right?

Interesting that Bruce Willis is to star in yet another scifi film that just might become a cult classic amongst true scifi believers! The advent of the jump onto comic books is getting popular, although this does tend to mean tried and tested stories get a look in over original films with debatable scifi origins
D

Bruce does like his scifi thrillers! He's got like 3 more in the works too (another comic adaptation as well.) But like I mentioned before, he's good at them and has had plenty of success so I don't blame him. And I applaud the guy for STILL being able kick butt and take names

The graphic novel does seem to have a cult following from what I've read. The author of the comic, Robert Venditti seems to think their interpretation of the movie will please those fans.
D

Excuse the double post, but I saw the trailer before Terminator yesterday and wanted to share....I was really excited because I've really been curious to see how the world of surrogates worked and I think the whole movie/premise looks pretty amazing. 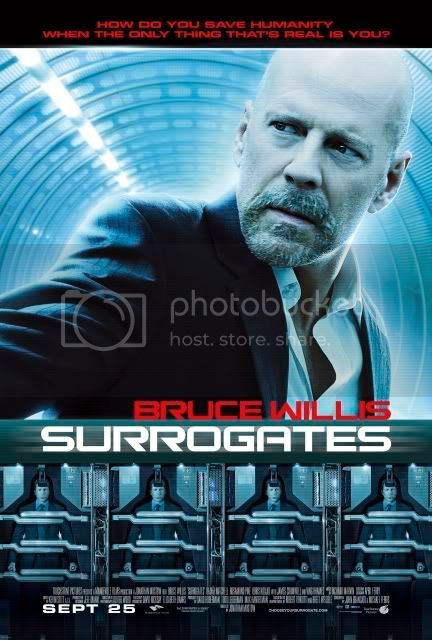 Any thoughts on the trailer??

The trailer takes the idea and story and really makes it look like a very interesting action film. I wonder what the rating is going to be on it though? 12+ or 15+ ??? Looks like it is dealing with quite a few violent and scary scenes. The end rating is what effects production after all.
D

Hmm...that's a good point. It seems like it's more a stylized, thinking thriller than a straight violent/action, kind of like Minority Report & I, Robot which were rated PG-13. Those were pretty awesome movies, but I guess we'll find out pretty soon!

darkrose said:
Hmm...that's a good point. It seems like it's more a stylized, thinking thriller than a straight violent/action, kind of like Minority Report & I, Robot which were rated PG-13. Those were pretty awesome movies, but I guess we'll find out pretty soon!
Click to expand...

I have to admit... I am not a big fan of either Minority Report with Tom Cruise nor of I, Robot with Will Smith. The actual story lines were not that bad, since they were based on the novels, but the actual execution of both of those movies seemed to be less concerned about the story than with being able to put the two actors into situations.

Of course, being a movie junkie, I'll watch them both when they are on but I can not help but wonder what the movies would have been like if unknown actors had been cast for the leads instead.
D

Yeah, I guess there is always that question of casting a big name star or not in any movie. But there is always that "box office power" thing too that comes into play. But like I mentioned earlier - Willis does have success with these kinds of movies so it makes sense to cast him, IMO anyway. I was also reading an interview with Robert Venditti (the novel's author), and he says the movie actually stayed really true to the comic. So hopefully it'll be more than just Bruce Willis-kicking-butt and lots more subtext
D

Tim said:
I wonder what the rating is going to be on it though? 12+ or 15+ ??? Looks like it is dealing with quite a few violent and scary scenes. The end rating is what effects production after all.
Click to expand...

Rating was just released and it's PG-13 here, for "intense sequences" and "disturbing images." I heard that the comic was dark and kinda intense but nothing overly violent and scary so I guess it makes sense.

Staff member
The more of the previews I see of this one, the more I want to see it.

From what I have seen the general plot seems familiar (eg: "In the future Mankind has come to depend upon {name of gizmo or situation} for their peaceful way of life, but what happens when that way of life is threatened?") but it still looks like it is going to be a pretty decent genre action film.
D

Haha, no worries Kevin - I succumbed to this movie LONG ago! I think at first glance, the whole premise seems pretty familiar but after the clips and interviews I've read, it actually seems much more complex and interesting and different. I'm definitely getting excited for it!
O

O-o-o, it is a catching title! I am interested in this film!

Writer
Saw the trailer for this in a few movies I've seen lately. Looks like a good one I'll want to watch. Hope it doesn't disappoint.
D

Yeah, same here. I saw a couple TV spots throughout the weekend - looks to me like Bruce Willis back! I definitely hope he is anyway