Technologically Advanced Alien Marking System
​
Imagine seeing an alien spacecraft landing in your front yard. What do the strange markings on it mean?

As a mind play I have come up with some crazy ideas...

The symbols mean multiple things and are read in layers.

Baseline Symbolizing
You see a series of symbols on the craft. Each symbol looks different and are of different case, boldness and scripting.
Those symbols are the triggers for an intricate description of the ship and its crew.
Each symbol represents a descriptor such as:
*Race of the operators/Race of the builders/Race of the directors
*Function of the Craft - Exploration/Defense/Offense/Research/Industry/ and so on.
*Origin of the Craft - Universe/SuperCluster/Galactic Group/Galaxy/Quadrant/Star/Planet or Moon
*Sequential Craft Identifier - Not expressed in numbers but in symbols of strength, uniqueness or standards.

Descriptive Symbol Modifications
Of the series of symbols you see, each has slight changes in their appearance. Each slight change means different things.
*Time Modifier - A symbol modification that indicates time in relation to the specific symbol on each symbol as dictated. If the time modifier is the same on every symbol then all symbols represent that specific time frame.
*Directive Modifier - A symbol modification on one or more symbols that indicate the directives of the craft pertaining to the symbol it is attached to.
*Strain Modifier - Identifies the origin strain of the organic/construct and its place in the craft's history

Each color of the spectrum indicates a representation of the degree of symbolism using shading to designate severity. One symbol may have multiple shades and hues of the same color at its top but may change colors completely in the middle, sides or the bottom or all at once.
Not only is the shade precise to the number of photons the colors are precise to the frequencies of the spectrum. So precise they can't be distinguished by the human eye.

Creating the Language of the Aliens
The House of Origins - Each family, race or species is designated to a specific symbol type. This identifier remains constant in all symbols representing that specific origin. It may be a line thickness, a special curve or line length, a color, a shade or a comparative height. The differences may be exactly precise. One slight variation of any element might mean something different.
The House of Intentions - A slight or extreme symbol modification that describes an intention within that symbols main representation. The modification may be accompanied by a color or shading as a precision indicator. A name symbol might use this as a way to tell that it is from a family of explorers or warriors.
The House of Time - Symbol modifications representing time might include a time modification with a color hue and shade representing time elapsed or time since or time remaining. A name symbol might show the time since the first creation of the family, the duration of the family or even the individual's age. Some might contain all the relevant data as modifications.

Another thing that most people might not consider is the blank spaces between the symbols. It is possible that the lack of a symbol in a string of symbols may represent something. Like the spaces between our words represents a new word. There may be symbols that represent the end of a sentence or phrase that are different depending upon the symbols before or after it. ./?"{[( and so on.

There may be symbols that represent other symbols combined. #$&! and so on. 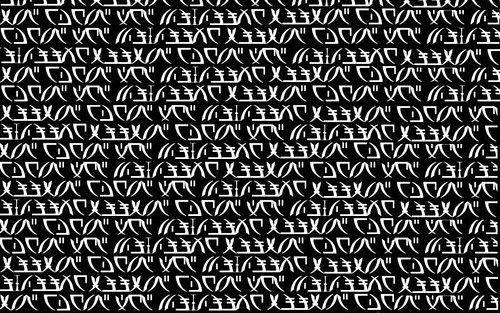 Place any of these on a ship and use color and shading with individual modifications and you have complex ship markings.

I AM SCIENCE FICTION
2 3