Space Test Stand A-2 Peering Out from the Fog 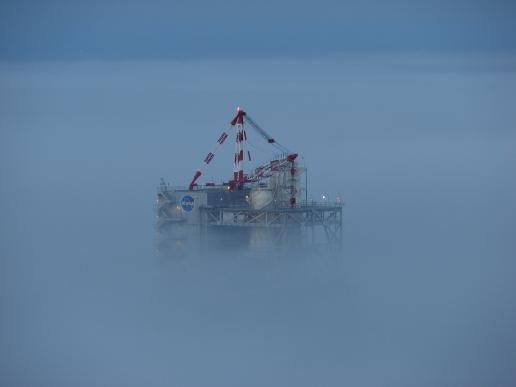 At Stennis Space Center, three large engine test stands were built the early 1960s to test the first and second stages of the Apollo Saturn V rocket that carried Americans to the moon. Since 1975, the test stands have supported testing of the Space Shuttle main engines. The last planned test was conducted in July of 2009. In this photo, the A-2 Test Stand peered out from a thick blanket of fog during the early morning hours of Oct. 28, 2009. This photo was taken from the top of the B Test Stand. The A-1 and A-2 test stands are transitioning to support J-2X engine testing for the Constellation Program, while the B-1/B-2 test stand will support stage testing. For the first time since the 1960s, a new test stand, called A-3, is under construction with a scheduled completion date of 2011. The A-3 test stand will be 300 feet tall and will enable engineers to conduct simulated high-altitude testing up to 100,000 feet. Photo Credit: NASA/SSC/Allen Forsman, Pratt and Whitney Rocketdyne (More at NASA Picture Of The Day)