Overview: Hello, Wisconsin! It's 1995 and Leia Forman, daughter of Eric and Donna, is visiting her grandparents for the summer where she bonds with a new generation of Point Place kids under the watchful eye of Kitty and the stern glare of Red. Sex, drugs and rock 'n roll never dies, it just changes clothes. 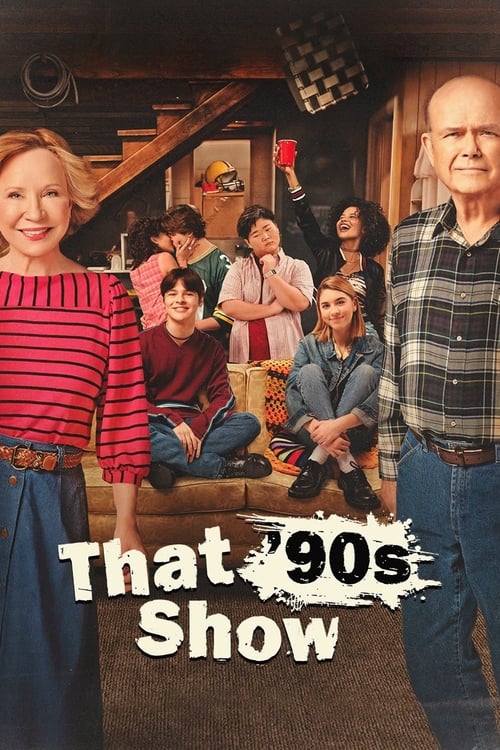 Staff member
Netflix released That '90s Show yesterday and I ended up binge watching it since it's only 10 episodes of about 30 minutes each. Yeah, yeah, I know, that still comes out five hours but it's background noise while I work.

Most of the actors from the original That '70s Show, except for Danny Masterson who played Hyde, make appearances, even Leo. Just don't expect this to be a continuation of the original show - while most of the original characters make appearances, all of the appearances are just brief scenes and some, like Michael and Jackie, are literally in just one scene of one episode. Red & Kitty though have a more prominent role as part of the main cast along with their new character granddaughter Leila. While the original '70s series was focused on the group of teens the '90s series makes it clear that Red, Kitty, and Leila are the center of the show.

Fans of the original show will appreciate that some lingering questions are answered over the course of the 10 episodes. While some questions are answered some aren't even addressed. Not even a mention of Hyde? Eric's sister, Laurie? Midge? Midge was played by Tanya Roberts who passed in 2021 but it'd still be interesting to hear what happened to the character.

There are some good one-liners peppered in the episodes, especially by Kitty. Red and Kitty absolutely make the show and I suspect a limited series of just them, without the kids, would be well received.

There are two things that did end up annoying me by the end.

The first is the fake laugh track. Maybe I'm just getting grumpier as I get older but the painfully fake laugh track started to feel like nails on a scratchboard. The laugh track was compounded by the second thing, the acting style of some of the kids.

If you watch a lot of movies & TV shows and also enjoy live theater productions you know that the acting style between them is different. Live productions lend themselves to acting styles that are overly exaggerated. If an actor on a show waves their hand it's easy to see on the TV. If an actor in a stage production waves their hand, the folks up in the second floor rear seats might not even notice it. To get over that the actor on stage will wave in an overly dramatic fashion, maybe a big huge arm movement and even moving their body while waving. It might look funny up close but those folks in the back of the second floor will see the actor waving. What might be a small, simple motion on TV turns into a big, animated overly emphasized motion on stage. The same thing when saying lines. A normal conversation tone works well on TV but not on stage, spoken words need to be clear & loud. The end result is an acting style that works & looks great on stage but can be weird on TV. For some reason a lot of Disney and Nickelodeon shows aimed at younger audiences tend to have their cast use an acting style that is better suited for the stage than TV. Maybe it works better for kids watching it but personally I find it quite annoying and feel that it ends up making the actors come off as amateurish. Of the six kids in the new group of friends at least 3 of them, including the main character Leila, are portrayed in that overly dramatic stage acting style. That itself wouldn't be bad but, combine acting that felt like an amateur school stage production with a fake laugh track inserted, and I ended up fighting the temptation to fast-forward through some scenes.

Netflix hasn't given indication yet whether a second season is being considered and the writers, it would seem, actually took that into account. The final episode of S1 ends in a way that leaves the door wide open for a second season and, if that doesn't happen, then S1 stands alone as a nice story to revisit a group of characters 20 years later, something that rarely happens with TV shows.

TLDR - Not bad, not great, an enjoyable reminisce for fans of the That '70s Show wrapped up into the story of a teen turning 15 in the summer of 1995 that she won't forget.

Kevin said:
There are two things that did end up annoying me by the end.
Click to expand...

Just for comparison I've been watching the first several episodes of That '70s Show and the acting style is definitely different. Watching the two shows close to each other makes That '90s Show acting by some of the teens cast feel like a kids show. It's also quite noticeable that the laugh track in That 70's Show is used a lot less.

If anybody is trying to find the shows, That '70s Show is available for streaming on Peacock while That '90s Show is on Netflix.


Kevin said:
There are some good one-liners peppered in the episodes, especially by Kitty.
Click to expand...

Even though Red and Kitty are not the main cast in That '70s Show, Kitty still gets some good zingers in.