ARROW IN THE HEAD. 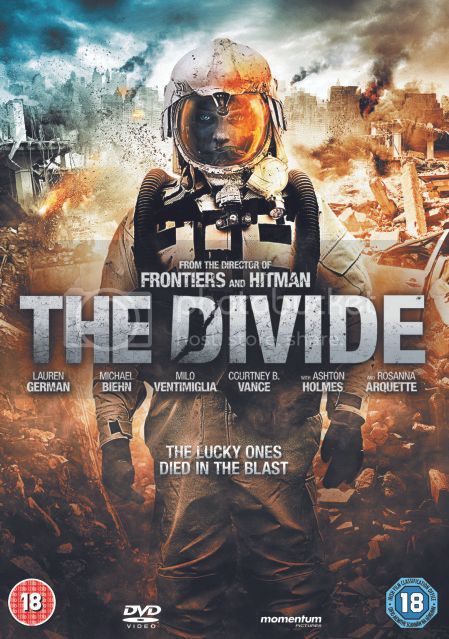 Strongly tipped as a filmmaker to watch on the strength of his astonishing debut feature “Frontier(s)” and hard-hitting follow up “Hitman”, director Xavier Gens fulfils all expectations with his latest offering, The Divide, an intense, post-apocalyptic shocker hailed as “a must-see” by Aint It Cool News and described by Screenjabber.com as “a film of extreme visual flair… thrilling… thought provoking, exciting highly recommended.”

As an onslaught of nuclear missiles from an unknown assailant falls on New York City, a small group of tenants and the caretaker of an apartment building manage to find refuge in the building’s bunker-like basement. But as the days and nights slowly tick by, their sanctuary starts to resemble something more akin to a living hell. Adding further terror to the situation, the shelter is unexpectedly attacked by mysterious armed assailants wearing hazmat suits, their motives unknown but their merciless method of assault all too clear. This new threat forces the trapped victims to unite against a common enemy but it is a unity that proves to be short-lived.

With little chance of rescue and only unspeakable horrors and almost certain death awaiting them on the outside, the survivors slowly begin to descend into madness as food and water supplies dwindle, tensions flare and self-preservation becomes the only option. The ensuing power struggle leads to physical, psychological and sexual torment among the group as each member loses touch with his and her humanity. Despite this, one individual holds on to the hope of some form of salvation beyond the thick concrete walls of what may soon become nothing more than a tomb.

From its terrifying opening sequence to its breathtaking and totally unexpected finale, The Divide grips like a vice throughout and sees the ever-excellent Michael Biehn delivering one of the most riveting performances of his career.

I watched this the other night and absolutly loved it. It's very strong stuff and definetly not for the faint hearted. One to check out if you haven't already

B
The movie: the Last airbender