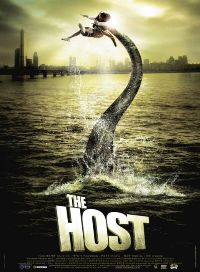 'Screendaily' have reported today that Singaporean production company Boku Films have just sealed a deal with Korea’s Chungeorahm to co-produce and invest $5m in the Korean (not to be confused with an upcoming Chinese version) sequel to hit monster movie The Host. Odd that they have had to look to Singapore for extra cash. We'd have thought Korean investors would have been falling over themselves to stump up the money for a share in what’s bound to be a sure fire hit? In any case, it looks like the ball is finally starting rolling on this creature feature fans, dream come true. A director has yet to be announced for the sequel, but currently they aim to "have it completed in 2010." An ambitious target that.