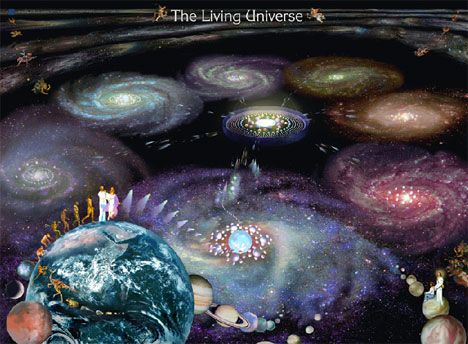 The Living Universe Foundation is a strange organization dedicated to the long-term colonization of the galaxy. In the long term, they envision humans tapping into the vast natural resources outside of planet Earth - from the sun’s energy (of which we get only a tiny fraction of course) to vast mineral deposits on nearby asteroids. In the short term, however, they believe that a series of self-sufficient, semi-autonomous ocean-going cities are the first step on this eight-step journey to galactic conquest. What are to start as sea-faring colonies would form the basis for future space journeys as these semi-independent enclaves could then be transported to the stars as units. Power would be generated by taking advantage of the temperature differentials at the water’s surface versus the deeps. The sea-borne populations would subsist on sea life and tourist trade and the urban design (shown above) would be based in part on managing water navigational issues. The first step in this project? Apparently, the foundation has started with a land-based colony in Texas with one resident in a trailer.
G

Good idea. So who is this Texan with a trailer and how does one get in touch with him/her? Is the society interested in others at this time either for ideas or support?

The Return of All Sci-Fi's Friday Live Chat!

L
Living tv are looking for a sci-fi wedding!