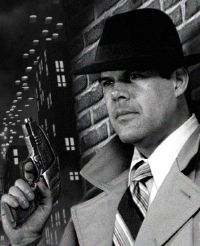 A couple of weeks ago we brought you news of Christopher Preksta's Mercury Men, a new retro-futuristic web-series that builds on the pulp scifi of the bygone era of Saturday matinée serials. Well now we're given word of yet another future-noir vision called The Magellan Affair.

A no-budget production that has only seen the release of its first chapter, the series immediately impresses with its combo of ambitious FX work and 40's detective movie tone.

Synopsis:
In a retro futuristic city, private eye James Stone takes a case too good to be true. Suddenly, he finds himself entangled in a dangerous web of deceit - one that leads into the far reaches of space and a mysterious government station called Magellan Base.

Watch the first episode of The Megallan Affair here.
Click to expand...