Earth's natural resources have been exhausted by mankind and battle rages between the soldiers of four leading Corporations: the Capitol, Bauhaus, Mishima and Imperial. Mitch Hunter (Thomas Jane) and Nathan Rooker, battle hardened Capitol soldiers, fight a desperate battle against a Bauhaus advance. When an errant shell destroys an ancient stone seal, they find themselves facing a new enemy: hideous NecroMutants, with bone blades that grow from their arms. Mitch barely manages to escape. Nathan does not.

The mutants multiply by millions and they destroy all before them. The Corporation's leader, Constantine (John Malkovich), is about to abandon the planet and leave countless innocents to their desperate fate, when he is approached by Brother Samuel (Ron Perlman), leader of the Brotherhood, and ancient monastic order.

Samuel is keeper of the Chronicles, a book that prophesies both the rise of the Mutants, and the 'Deliverer' that will destroy them. Samuel believes he is that Deliverer destined to journey deep into the earth and destroy the source of the mutant scourge. He manages to recruit Mitch, along with a handful of like-minded soldiers: Steiner, honour bound Bauhaus officer; sword wielding Severian; street fighter El Jesus; fearless beauty Duval; and stoic warrior Juba.

Mutant Chronicles follows Mitch and Samuel's mission to venture into the very heart of the darkness in an attempt to save the planet from marauding hordes of deathless mutants. 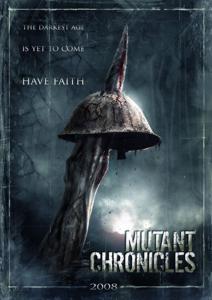 I saw it twice on the Sci-Fi channel.
I expected better, but that always seems to be the case. Never the less, it has/had possibilities.
Not totally unbearable, but I thought it had an original story. that with some invention and expansion could've been first rate.
More battles, better weapons, better monsters for starters.
I expected big things when I first heard of it, years back?
The English obsession with Nazi's, panzers, and trench warfare (complete with poison gas). poked out it's ugly head again.
The stars were OK, and the acting, not bad.
The coal fired, steam powered aircraft, the giant artillery (880's, sound familiar)(must have taken a day to load), and the spoke wheeled APC's were a bit much.
The story that the worlds leaders formed waring corporations (roller ball), and the resulting polluted desolation of their envisioned "Utopia", fighting for the Last of the worlds resources, is too close to reality.
Their utter failure was imminent and inevitable, and they (at least the one giving out the off-world passes), did not avoid and seemed to welcome his/their ... end.
A cleansing was/is coming, either by our choice or by a higher power.
Anyway, that's the message I got, whether or not it was the one they attempted to project.
I may buy it when the DVD hits the boom-boom rack (on the cheap).
Share:
Facebook Twitter Reddit Pinterest Tumblr WhatsApp Email Share Link
Top