Overview: Follows the crew of the not-so-functional exploratory ship in the Earth's interstellar fleet, 400 years in the future. 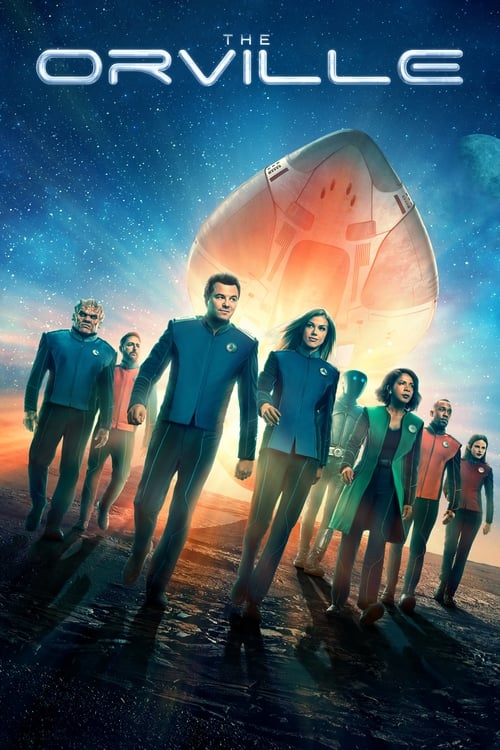 Staff member
The Orville is a new sci-fi show on Fox that was created by Seth MacFarlane. Yes, the same guy behind Family Guy and American Dad as well other works that are usually considered adult oriented comedy.

MacFarlane has openly talked about being a Star Trek fan in the past and even made an appearance in a Star Trek: Enterprise episode. In recent years, well before Star Trek: Discovery got off the ground, he had expressed wanting to reboot Trek for TV. The Orville is clearly aimed as his take on the Next Generation era of Star Trek.

The pilot episode set the premise for the show. Captain Ed Mercer, a dedicated Federation Union captain, comes home to find his wife in bed with an alien. They divorce and for the next year Mercer's career is in a downward spiral until he is given the command of an exploratory vessel, the Orville. The first officer assigned to him is his ex-wife.

The Orville has many of the amenities that were introduced in ST:TNG such a holodeck, a bar, families, and food replicators. Oh, the producer? Brannon Braga (a name well known to Trek fans for his work on multiple Trek shows and movies). The ship designs and sets are all reminiscent of ST:TNG but just different enough to avoid being called "Star Trek".

So far the episodes, three aired so far, have been mixed. They all have that dry humor that is present in all of MacFarlane's shows but the show isn't a comedy. There are some dramatic moments but it isn't a drama. I wouldn't call it a parody either as it seems to be trying to present itself as more of a homage to Trek versus mocking it. Maybe the "dramedy" label would best apply. The second episode was a bit predictable with an ending that shows MacFarlane can't get away from his roots. The third episode though, dealing with gender identification, could have easily had it's dialog reworked up a bit to have been a ST:TNG episode. The Mexican Standoff scene in the holodeck was amusing -- if you aren't familiar with MacFarlane's works this scene serves a nice way of showing that you just never know what direction the dialog is going in.

If you're looking for a pure sci-fi show you'll be disappointed. If you don't like MacFarlane's other works you'll be disappointed. If you like some light sci-fi though that combines a bit of comedy with a bit of low-brow comedy then you'll like it. It'll be interesting to see how the show progresses during the rest of the season, whether it keeps the same tone or whether it embraces the comedy or drama sides of itself.


Speaking of the second episode, without cheating what are your guesses on who made cameos as these two aliens uncredited? While the show they are most known for has been busted they are still easily recognizable out of makeup by fans. 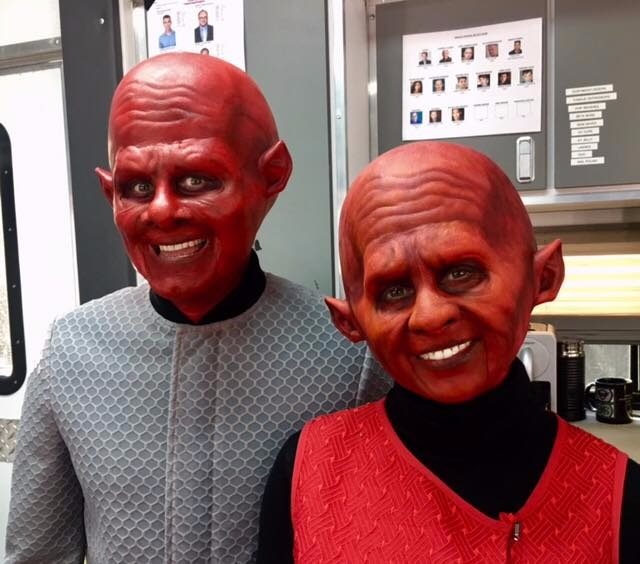 Absolutely excellent series! I'm recording em' as they finish each one. Seth has done and outstanding job on it, and the humor fits my Italian/Viking sense of humor....

Staff member
S1:E5 "Pria" ... directed by Jonathan Frakes with Cherlize Theron guest starring ... I sure hope more of you guys are watching this show!

If you only saw the first two episodes go back and give it another try.

Kevin said:
I sure hope more of you guys are watching this show!
Click to expand...

On my To Watch list. (Waiting for a complete series to binge watch)

Ooops another silly turn, visiting a Earth like planet, saying capitalism is bad, derp, not good. He will loose fans preaching his politics, Seth, just entertain us, spare us the politics...cmon dude!

Staff member
For UK sci-fi fans The Orville lands December 14th on Fox UK. You will no longer need to fear the banana.

Staff member
Some good news for fans, The Orville has been picked up for a second season by Fox.


Seth MacFarlane’s space adventure series The Orville has been picked up for a second season by Fox. The decision comes seven episodes into The Orville‘s 13-episode first season. Because of the show’s elaborate production and post-production, including visual effects, The Orville had been intended for a limited season, and the early renewal will give it a head start on Season 2 whose exact length is TBD.

“Once again Seth has struck a powerful chord with viewers,” said Fox Entertainment president Michael Thorn. “He has delivered a series full of optimism, drama and his trademark humor. We want to thank him and the rest of the talented cast, as well as the producers and crew, for an incredible first season. We can’t wait to see where The Orville travels in the second.”​

Yeuppers, keep it on and less politics and it will be a funny sci-fi winner!

I've heard mixed reviews but I may have to give it a go especially since they got renewed. They definitely marketed it as a comedy but now that I hear it has some dramatic sci-fi moments its been officially added to my list.

HAnnAHbear said:
I've heard mixed reviews but I may have to give it a go especially since they got renewed. They definitely marketed it as a comedy but now that I hear it has some dramatic sci-fi moments its been officially added to my list.
Click to expand...

I think the first two episodes, and Fox's marketing, were pushing it more for the comedy side of Seth MacFarlane but as the episodes continue each has less of the gag jokes and leans more towards a straight sci-fi "dramedy" show.

PS: Welcome to the community!

Yeuppers, its a pretty funny series, the last one was good with the ship wreck, and the gal breaking out of a survivorlist residence. He still needs to keep the funny bits in, have some seriousness, keep the action, and loose the polotics, then we will be straight.....

Staff member
S1:E10, "Firestorm", really should've been their Halloween episode. The episode ending seemed a little forced, like the writers were pretty deep into the episode and realized that they didn't have much time left to wrap things up so they came up with a quickie resolution, but still not bad.

Yeuppers, I saw the latest one, pretty dang good, Robert Picardo from Voyager was on it, Pretty clever....

You abductees convinced me. I have started episode 1. Just lucky all episodes are On Demand.
It's nowhere near as goofy as I thought it'd be!

Icky said:
You abductees convinced me. I have started episode 1. Just lucky all episodes are On Demand.
It's nowhere near as goofy as I thought it'd be!
Click to expand...

Some P.C. stuff on it, but I gritted my teeth through it. Its getting very Star Trekkie like, which is good.

Hang on a minute. I have finished only episode 1, I've yet to see PC-ness.
Sci-Fi-Dude, you don't appreciate any program that has a political view (left or right) scripted in to the episode? You'd rather they just leave politics out of it? Am I reading you correctly?

Icky said:
Hang on a minute. I have finished only episode 1, I've yet to see PC-ness.
Sci-Fi-Dude, you don't appreciate any program that has a political view (left or right) scripted in to the episode? You'd rather they just leave politics out of it? Am I reading you correctly?
Click to expand...

LOL! Yeup 2 male critters having a child, Seth kissing another man, eww. LOL! Seth said in the hanger about his no God opinion, it don't get any more pc than that. Don't get me wrong missy, the program is interesting, but like married with children, or any other tv show, when they push a progressive agenda, the shows always fail. Remember not all America is progressive, I know its hard for folks out there that have been raised or told to be a certain way, to think the world revolves around a certain way, not all of us see things in a progressive way. Imagine if the earth was all 1 way, we would all be boring robots, Sorry Robbie. And life would not have any spice to it.

Icky said:
Hang on a minute. I have finished only episode 1, I've yet to see PC-ness.
Sci-Fi-Dude, you don't appreciate any program that has a political view (left or right) scripted in to the episode? You'd rather they just leave politics out of it? Am I reading you correctly?
Click to expand...

Ok here is your chance to see Sci-fi dudes non pc (Practically commie) script for a sci fi film. Ready? good! Act 1; scene 1, a big beautiful space ship is docked at a space port. Introduce crew....Captain Schmeckle, man of much adventure and the gals love him. Derpbot, funny robot, always enjoys a pie in the face joke. Irishy the engeneer, he keeps the zorpe drive running like a sodomized ape! Lt. Sha nay nay, one tough sister from commpton, with a degree in commication, always good for a back up fight. The pretty nurse Misty eyes, when the fellers see her they get all misty because she belongs to the captain! Lt. Spork, a Culkin with great wisdom and knowledge, and the rest of the crew.........Act2; scene 2; the ship is cleared to leave the space dock. Captain Schmeckle to Irishy, fire up the zorpe drive and take us out. Attractive female helms gals throttle up the massive ship and their are under way. Act 3; scene 3, Lt. Sha nay nay to captain, Sir we are getting a signal from that massive cloud in front of us, shall I contact them? Derp bot walks in front of the main screen pulls out a crème pie and splats it in his face, everybody laughs, Ohhh derp bot!. A signal comes from the cloud, a low gravely menicing voice comes from the abysss..........To be continued....
TV show information provided by The Movie Database