The psychology of long journeys

It's interesting to hear that some of the isolation trials have gone rather badly. It says at least the higher ups must therefore know of the potential problems of long, isolated feeling journeys in space ahead of man.


By Lara Farrar
For CNN

LONDON, England (CNN) -- If Dr. Robert Zubrin could take a trip to Mars, he would be sure to pack a bread maker in his suitcase. Not just because bread is a pretty reliable expeditionary food, but because the act of cooking, according to Zubrin, seems to help people get along with each other, especially when they are in slightly dire, less than luxurious and more than stressful circumstances. 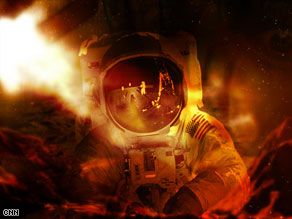 Red Planet pioneers will face extreme isolation and confinement on a years-long trip to Mars.

And Zubrin would know, too. He has, after all, led almost a half-dozen mock Mars missions on barren Arctic ice fields and scorching Utah deserts with volunteer teams made up of students, scientists, journalists and anyone else willing to wear fake spacesuits and live in tiny tin-can-like habitation modules for days on end.

The simulated expeditions were made, in part, to research ways to live and work on the Red Planet. But they also revealed something else: what personality types might best be suited to make the 35 million-mile journey and who would be better off watching from Mission Control.

"Some of these crews have worked out very well," said Zubrin, president of the Mars Society, a 7,000-member multinational group determined to reach what it calls the New World. "Others were at each other's throats."

While it will probably take at least another 20 years before Zubrin -- or anyone else for that matter -- makes it to the Martian surface, NASA and other space agencies are already drawing up plans for a voyage that will present astronauts not only with physical but also psychological challenges never faced by humans before.

"When you go to Mars, all bets are off," said Dr. Nick Kanas, a professor at the University of California, San Francisco, who has studied astronaut psychology. "We don't know what is going to happen."

One particularly important task, Kanas explained, will be picking a team of astronauts who can both work and get along with each other on a trip lasting at least two years, spent mostly within the confines of a not-so-big spacecraft sailing through the dark. The European Space Agency and the Russian Institute of Biomedial Problems are scheduled to run a joint 520-day mock Mars expedition this year aimed to study the effects of extreme isolation and confinement on 12 volunteers.

The numbers of men and women, their ages and even cultural upbringings must be carefully calculated to try to prevent what could be potentially devastating cosmic quarrels. "You can't just take a walk and get away from somebody," Kanas said.

Nor will astronauts really be able to talk to anyone, either -- at least not on Earth -- mainly because of a 44-minute communication delay between the Blue and Red planets, "which means you can't have a nice chat with your kids," said Kanas. "You are so far away; you really are isolated."

That means Mars-bound astronauts will also have to skip out on the ground-based psychological support sessions that astronauts and cosmonauts working on the international space station routinely have just to make sure microgravity has not gone to their heads (Before Soviet cosmonaut Yuri Gagarin became the first man in space in 1961, experts were afraid weightlessness might cause schizophrenia, explained one doctor).

And they will not be able to receive surprise presents, like special cookies or favorite movies, which are often brought to the space station on supply shuttles when someone starts feeling homesick or maybe a little blue. Thus, decking out the Martian-bound craft with family photographs, special trinkets, books and even plants will be crucial for a mostly monotonous extraterrestrial road trip that will bring a whole new meaning to the "are we there yet?" question.
If someone becomes sick -- either physically or mentally -- the crew has to be ready to cope with that, too.

"If someone gets suicidal, you have to take care of it on board," Kanas said. Mission Control might also have to make some tough calls, like whether to tell an astronaut about a death in his or her family or other tragedies back home.

Kanas has even coined a term for the situation: the "Earth out of view" phenomenon.

"Nobody in the history of mankind has ever experienced the Earth as a pale, insignificant blue dot in the sky," he said. "What that might do to a crew member, nobody knows."

But Walter Sipes, a NASA psychologist at Johnson Space Center in Houston, said he thinks he knows where to look to start finding answers: history books.

"When early explorers left their home countries on the seas, they didn't see their home countries anymore," Sipes said. "They didn't even have a dot to look at. It was out of sight on the other side of the world. It is not like we are reinventing the wheel. We are just doing the same thing in a different environment that was just as demanding then."

And just as some early explorers made the ultimate sacrifice while searching for unknown lands, space pioneers may also pay a steep price for bravely going where no human has gone before.

"Do you follow the the sea tradition where people are buried at sea?" Sipes asked. "If someone dies, are they buried in space?"

Mars should be treated as if it is a one way trip.

skwirlinator said:
Mars should be treated as if it is a one way trip.
Click to expand...

While I suspect there would be plenty of volunteers for such a mission it wouldn't be long though before the more liberal members of our societies start protesting about sending somebody off on a one-way trip.

I wonder how Spain dealt with the liberal factions in 1492? HHHmm.....