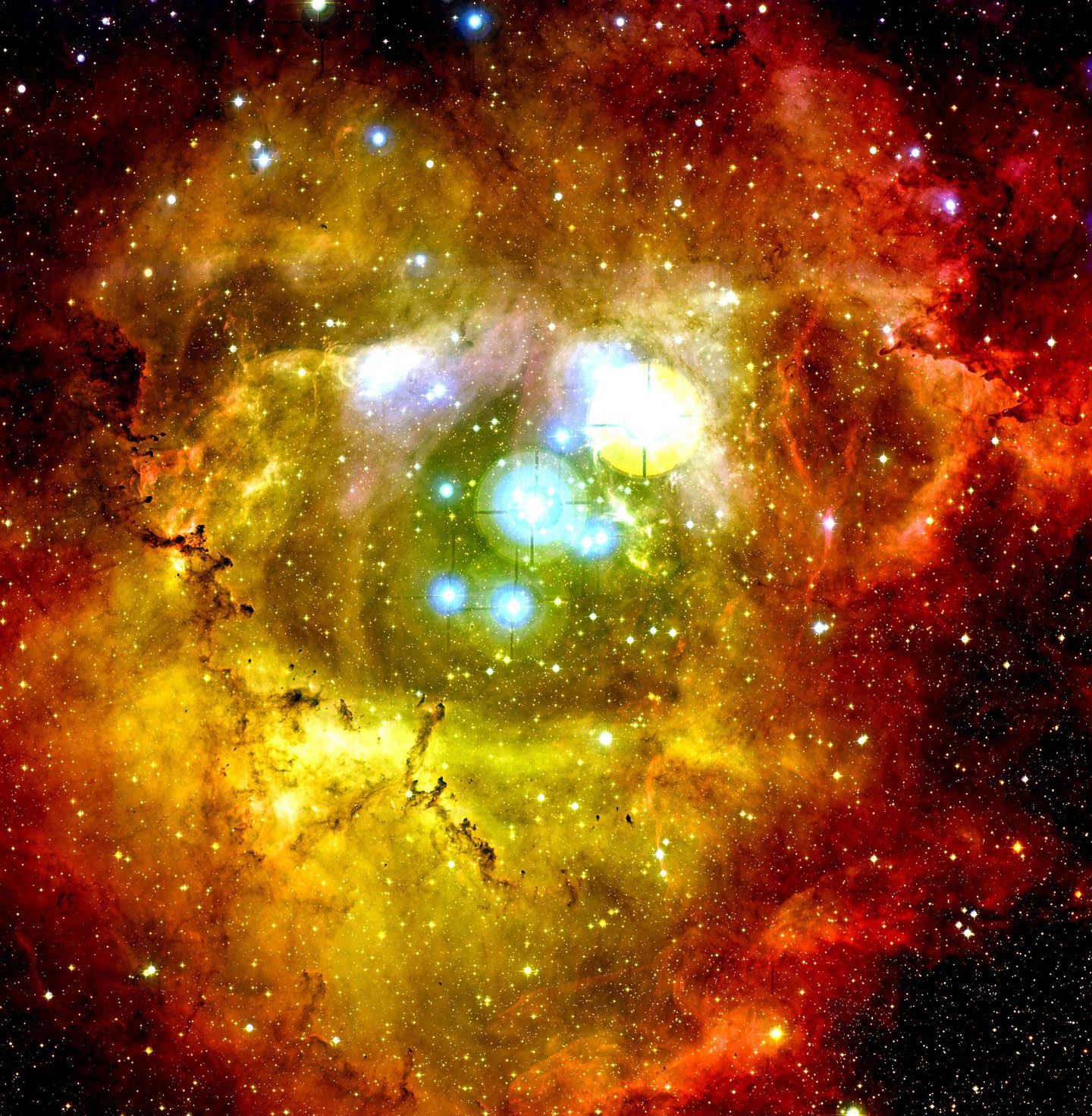 The Rosette Nebula is a cloud of gas and dust, about 130 light years in diameter, lying approximately 5000 light years from our Solar System, in the direction of the constellation of Monoceros. The mass of the nebula is estimated at 10 thousand Solar masses, even though it is just a small part of a much larger region of gas and dust spanning the entire constellation. The Rosette would appear as large as the full Moon, if it were visible to the eye, but it is so faint that visual observation is difficult, even with telescopes. The hot, bright stars in its center are easily visible, being point sources of light; but the diffuse light of the nebula requires photography with filters which block out all of the light of the night sky, save for wavelengths emitted by gases in the nebula, as they absorb the ultraviolet radiation pouring out of the stars which illuminate the nebula.
In the animation at the right (from images by Richard Crisp at apod050214 and narrowbandimaging.com), the H-alpha (Ha) radiation of neutral hydrogen atoms is used to bring out the primary detail in the nebula, while radiation by doubly ionized oxygen atoms and singly ionized sulfur atoms is used to establish a range of colors, for an "artistic" rendering of the nebula's supposed color. This color is completely false, since objects so faint, even if visible to our eyes, would appear to be only a pale gray, or greenish-gray; but makes the image far more interesting than if presented only in black and white (as can be seen by the alternation of the color image with the black-and-white Ha image).
The spectacular image below (MegaPrime Camera, Canada-France-Hawaii Telescope, apod030429) shows the hot, bright stars in the center of the cloud heating the gas surrounding them from 100 Kelvins to 10000 Kelvins (*see note below), increasing the pressure of the gas by more than a hundred times, and causing it to push against the surrounding clouds of gas, simultaneously eating away at them, and compressing them to small, dark compact regions which will become the next generation of stars. Most of the bright stars visible in the central cluster were formed over a period of a few million years, but some may have formed within the last few thousands of years, since star formation is still ongoing, in the region.
*Note: Although most of the gas pushing against the surrounding clouds has a temperature of 10 thousand Kelvins, observations with the Chandra X-ray observatory have revealed that in the central part of the nebula, collisional shock waves from stellar winds blowing in opposite directions (from exceptionally hot, young stars in the center of the cluster) have heated the gas to 6 million Kelvins.