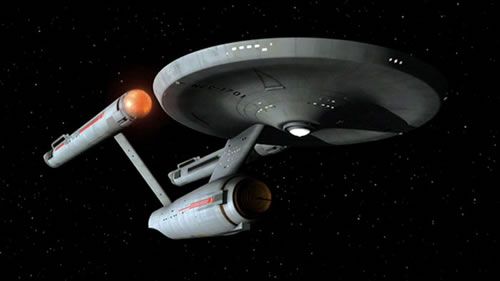 USS Enterprise (NCC-1701), the starship in the original Star Trek TV series​
To boldly go where no man has gone before, you'd need a really good starship - and to launch Star Trek, the pop culture phenomenon that entertained and inspired millions, you'd need a pretty darned good one! And that is exactly what the United Space Starship Enterprise delivered. Here are 8 Starship Enterprise facts every Trekker should know:
1. Meet the REAL Enterprise(Several of Them, Actually)

(L) The tenth HMS Enterprise, an Arctic survey sloop (1848), painting by WH Browne from the National Maritime Museum online collection;
(R) USS Enterprise at Valcour Island, Lake Champlain, New York (1776) from Dictionary of American Naval Fighting Ships​
Before Star Trek, there have been many actual ships named Enterprise. The very first one of note was a French frigate L'Enterprise, which was captured by the British Royal Navy in 1705 and renamed as HMS Enterprise. It served as a British gun ship until it was wrecked just two years later. After this ship, there were 14 other HMS also named Enterprise (sometimes spelled Enterprize).
The United States have 8 battleships named Enterprise, including the first nuclear powered aircraft carrier in the world. The very first one (before the US became a country, so technically it was a ship of the Continental Navy) was an armed sloop on Lake Champlain in 1775 named the United States Ship (USS) Enterprise.
During the American Civil War, aeronaut and scientist Thaddeus S.C. Lowe built a balloon named Enterprise, to be used by the Union Army to perform aerial recon on Confederate troops.

(L) Enterprise, a gas inflated aerostat (1858); (M) Space Shuttle Enterprise; (R) Artist rendering of VSS Enterprise​
And who can forget the Space Shuttle Enterprise? It was the very first Space Shuttle orbiter, built for NASA in 1976. The Shuttle was supposed to be named Constitution, but a write-in campaign successfully persuaded NASA to name it after the Star Trek starship. (Interestingly, the fictional Starship Enterprise was a Constitution-class vessel - coincidence? Hm....)
The last actual Enterprise hasn't been built yet but it already has a name: Virgin Space Ship (VSS) Enterprise and yes, it's an homage to Star Trek. It's a suborbital spaceplane being built by Sir Richard Branson of Virgin for the purposes of space tourism.
Ironically, when Sir Richard offered the first flight to William Shatner, the actor declined and revealed that he's actually afraid of space travel, "I'm interested in man's march into the unknown but to vomit in space is not my idea of a good time. Neither is a fiery crash with the vomit hovering over me." Shatner added that he's not entirely against the idea - he just needed some reassurance. "I do want to go up but I need guarantees I'll definitely come back." (Source)
2. No Rockets, Jets or Firestreams

Star Trek creator Gene Roddenberry, who pitched the TV show as "Wagon Train to the Stars," didn't tell art director Matt Jefferies what Starship Enterprise should look like, instead he told the bewildered art director what he did not want to see. Starship Concept Art has reprint of a nifty article in Star Trek: The Magazine by Jefferies about the design process:

"In my approach to Star Trek I wanted to be as practical as possible," Jefferies says. "I could tell Gene was serious enough, but I really didn't know where to start. I knew the Enterprise was going to be on the cutting edge of the future, but essentially he gave me the job of finding a shape, and I didn't know what the shape looked like." Although Roddenberry knew a lot about his ship, he had never visualized it, and consequently made the situation more complicated since he couldn't give Jefferies a detailed sense of direction. According to Jefferies, Roddenberry was absolutely clear to avoid any resemblance to a 1960's rocket ship. "Gene described the 100-150 man crew, outer space, fantastic, unheard-of speed, and that we didn't have to worry about gravity. He had emphasized that there were to be no fins, no wings, no smoke trails, no flames, no rocket.
​
After hundreds of drawings, Jefferies came up with this: 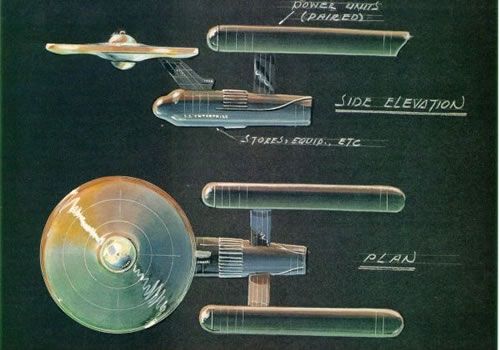 Image via Starship Concept Art​
In his honor, the crawl spaces on all of the Starfleet starships on Star Trek are called Jefferies tubes.
3. The Original Name of USS Enterprise

That's right - the iconic starship wasn't always named USS Enterprise ... in the original draft, Roddenberry named it USS Yorktown after a World War II aircraft carrier. The starship was commanded by Captain Robert April, then Christopher Pike, before Roddenberry settled on James Tiberius Kirk.
By the way, William Shatner was the third choice for Kirk. The role was offered to Lloyd Bridges and Jack Lord, both of whom declined it.
4. The Origin of NCC-1701

How did the famous USS Enterprise get its registration number NCC-1701 is the stuff of legend. There are conflicting stories, including one where 1701 is a tribute to Roddenberry's childhood neighbor's house number or that Jefferies got it from the registration number of his airplane.
Here's Matt Jefferies' explanation when he was asked during a BBC Interview:

NC, by international agreement, stood for all United States commercial vehicles. Russia had wound up with four Cs, CC CC. It’d been pretty much a common opinion that any major effort in space would be two expensive for any one country, so I mixed the US and the Russian and came up with NCC.
The one seven zero part - I needed a number that would be instantly identifiable, and three, six, eight and nine are too easily confused. I don’t think anyone’ll confuse a one and a seven, or the zero. So the one seven stood for the seventeenth basic ship design in the Federation, and the zero one would have been serial number one, the first bird.
​
5. Land the Ship? Too Expensive, Let's Teleport Everybody Instead! 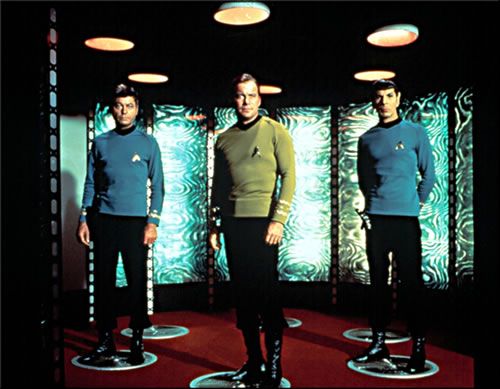 Originally, Roddenberry envisioned the USS Enterprise to land on various planets, but it turned out to be too expensive as it would require them to build expensive sets. The next idea was to use shuttles - but when filming began, the full-sized shooting model wasn't ready. So, they came up with the idea of "beaming down" the crew via a teleportation device and thus the transporter was born! (Source)
In 1994, TIME Magazine interviewed Star Trek technical expert Michael Okuda about the intricacies of the transporter:

"It should be possible if we decompile the pattern buffer."
Transporters can send people instantly from one location to another by converting their molecules into energy, then reassembling them. Every living being has a distinct pattern of molecules; the pattern buffer fixes the configuration by adjusting for the Doppler effect -- the apparent change in the frequency of the energy waves caused by motion.
"I'll verify the Heisenberg compensators."
The Heisenberg Uncertainty Principle states that you cannot know a subatomic particle's exact position and its exact direction and velocity at the same time. To transport people you have to know all those things, so the Heisenberg compensator was devised to overcome that problem. It's an attempt by the Trek writers to signal that they are at least aware of the issue. And how does the Heisenberg compensator work? "It works very well, thank you," says Okuda.
​
6. The Next Gen Enterprise: Hilton in Space

Jefferies designed the bridge in the original USS Enterprise in the style of a Navy battleship, with specialized workstations for its crew. When set designer Richard James updated the bridge for Star Trek: The Next Generation(restriction: no purple!), Jefferies was asked about the new look. To which he replied:

Gene asked me how I liked the show, and I said that he had taken the bridge of my ship and turned it into the lobby of the Hilton. And I have just never watched any of them since. I’m lost.
​
Ironically, Star Trek and Hilton actually did come together to create a theme attraction. Star Trek: The Experience opened in 1998 at the Las Vegas Hilton. It closed in 2008 due to low attendance (though it is due to re-open in a different location in 2010).
7. The Original Star Trek Enterprise Prop 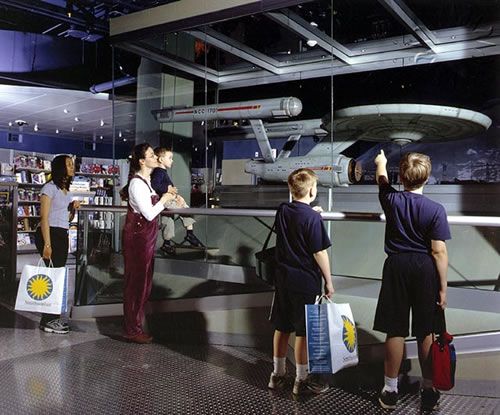 Photo: Carolyn Russo / Smithsonian​
If you visit the National Air and Space Museum at the Smithsonian, definitely check out the actual model of the Starship Enterprise used in the filming of the original Star Trek TV show. 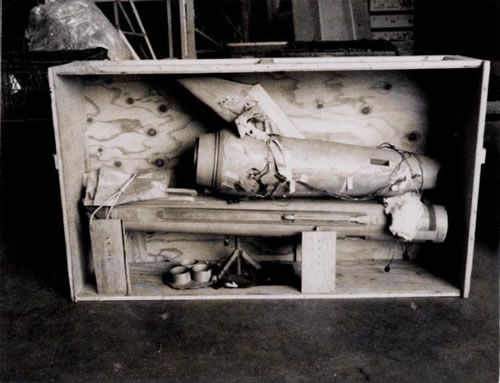 The hull and one nacelle of the original Star Trek Starship Enterprise model as it was received by the National Air and Space Museum from Paramount Studios on March 1, 1974. Image WEB11192-2009. Photo: Smithsonian (with permission)​
The model of the Enterprise was sent to the museum in crates, donated by Paramount Studios five years after the series ended. 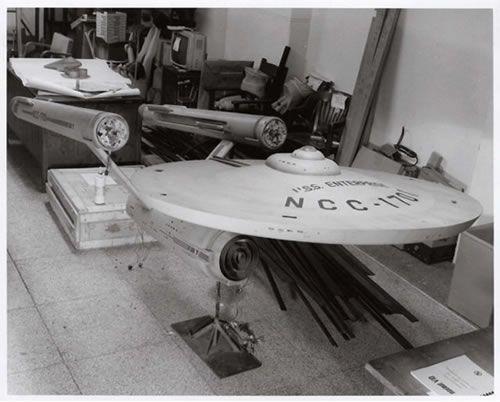 Enterprise during its first Smithsonian restoration. SI Neg #74-3977. Photo: Smithsonian (with permission)​
The Smithsonian performed extensive restoration to put the starship model back together, and for the first time ever, the photos of the restoration process are available to the public at the museum's blog.
The Museum Registrar Gregory K.H. Bryant has more on this behind the scenes look at the icon science fiction model: Link - Thanks Llori!
8. The Hot-Rod Starship Enterprise

For his movie Star Trek, director J.J. Abrams decided that the USS Enterprise could use a face-lift and worked with artists at Industrial Light & Magic to update the starship - like Roddenberry, he gave a simple directive:

"He wanted a hot-rod type of vehicle, but they also wanted to preserve the Enterprise kind of look," model maker John Goodson said in a presentation at ILM's San Francisco headquarters earlier this month.
"J.J. Abrams kept saying, 'Make it a bigger movie. Make it a bigger shot,'" creative director David Nakabayashi added. "I think that's one thing you see in this film, at least: The stuff I've seen is just everything is big."
​
SCI FI Wire has the interview with model maker John Goodson and visual effects supervisor Roger Guyett about the new Enterprise: Link
The official website for JJ Abram's Star Trek movie has a nifty 360° panorama of the bridge of the new starship: 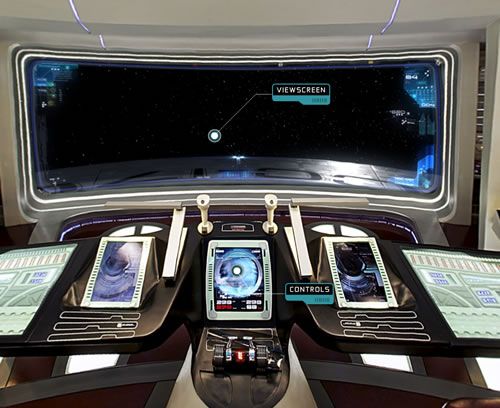