This story is quite amusing how they fitted the snails with chips and then are using them to 'transfer' data from one machine to another as part of an art project. It's a big joke about showing how 'snail mail' is really slow and doesn't always get to it's intended destination. 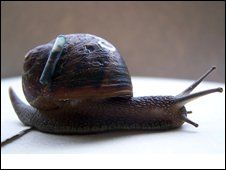 The three snails are fitted with RFID chips

Muriel, Austin and Cecil are snails for the electronic age.
The gastropods have been fitted with equipment to allow them to send e-mails on behalf of visitors to a website.
Instead of instantaneous communication, sent messages will travel at 0.03mph (0.05km/h) and could take days, weeks or even months to arrive.
It is part of a "slow art" project called Real Snail Mail at Bournemouth University in the UK which will be showcased in Los Angeles in August.
"One thing technology promises us is speed, acceleration, more of everything in less time," said Paul Smith, a visual artist working on the project.
"Culturally, we seem obsessed with immediacy. Time is not to be taken but crammed to bursting point."

The researchers hope the project will encourage people to take their time and contemplate the technology and the work.
Each snail is fitted with a tiny capsule which holds a Radio Frequency Identification (RFID) chip. RFID allows objects to communicate over short distances.
Users of the service send a message via the Real Snail Mail website which is routed to the tank at the speed of light to await collection by a snail "agent".
As the three snails slowly amble around the tank, they occasionally come into range of an electronic reader, which attaches the e-mail message to the RFID chip.
The electronic messages are then physically carried around the tank by the snails until one of the gastropods passes close to a second reader.
It is then forwarded over the net in the usual way.
"It could be quite frustrating for some people," Vicky Isley, one of the artists told BBC News. "It's completely subverting that normal system."
So far, the three snails have managed to deliver 14 messages.
Users of the service will hope that Austin is on hand to collect their messages. The Snail has made 10 of the deliveries so far with an average delivery time of 1.96 days.
"He's a super-powered snail - he's doing really well," said Ms Isely. "He's really quite big - he's always the one that gets to the food first."
Unfortunately, Muriel is still languishing, waiting to make her first delivery.
The project will be on show at the computer graphics conference Siggraph in Los Angeles from 11-15 August.
Click to expand...

Staff member
I had to re-read to make sure I understood what exactly they were trying to accomplish.

Other than NetFlix, I can't even remember the last time I used snail mail for outgoing mail.

9th Workshop on Space and the Arts