"After" is the ninth episode of the fourth season of the post-apocalyptic horror television series The Walking Dead; it aired on AMC on February 9, 2014.

In this episode — written by Robert Kirkman and directed by Greg Nicotero — Rick (Andrew Lincoln) and Carl Grimes (Chandler Riggs) find themselves on the road following the attack on the prison, while Michonne (Danai Gurira) deals with her past.

The episode recorded 15.8 million viewers with 10.4 million adults between 18-49. The viewings for the adult 18 demographic were higher than the 2014 Sochi Winter Olympics in the same time slot.

Staff member
A poll that some fans might get upset about but do think that season 4 of The Walking Dead is as good as the prior season?

Season 1 we saw the world of The Walking Dead introduced and we saw some great scenes in a zombie held Atlanta. The first season had one of the most memorable episodes with the survivors at the Center for Disease Control where they encountered Dr. Jenner gave the gut wrenching news that everybody was already infected; you die, you turn. Season 2 took the survivors to the farm with Hershel & his family. The season dealt with the power struggle between two friends, Rick & Shane, and with faith. Season 3 the survivors found a virtual fortress, a prison compound, where they think they can finally relax a bit only to end up in a war with a power mad self-appointed Governor who has a few issues of his own.

Which brings us up to Season 4. An old foe has returned ultimately leading to the demise of their safe haven. The story is moving forward but is it as good watching it as the prior seasons?

I don't think it is. I can't put my finger on what exactly it is that's not appealing to me, but I'm finding I'm just not that bothered about making sure I watch it this season.

For me it's not, I don't like how the season started and is continuing. I don't have anything invested in the characters. I do like Michonne and Abraham Ford, and would very much like to see how their characters grow and change. I used to like Rick, imo I find him whiny, weak and irritating. Today's episode I might just forgo until next Sunday. The preview didn't do anything for me. Today I'm more excited to watch The Oscars and all the before show coverage. I still enjoy the show but not like before. 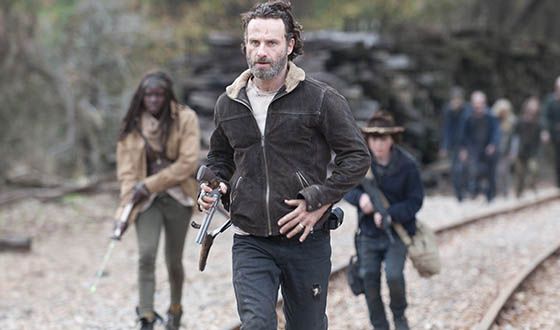 Season 4 set a new viewership record for The Walking Dead, averaging 13.3 million live/same day viewers per episode and 8.6 million adults 18-49, an increase of +24%/+22% over the Season 3 average.

“The linear television business is Dead and well,” said Charlie Collier, AMC president. “Thanks to Robert Kirkman, Scott Gimple, the other terrific executive producers and the entire cast, crew and network for working together to bring the fans (myself included) another unforgettable season of The Walking Dead. To see this show serve as the centerpiece of a truly historic night on AMC is truly gratifying. So many played a role in this success, across all three shows, in giving the fans a reason to continue to return in ever-greater numbers. And so we say, until next fall, ‘Welcome to Terminus.’”

The Season 4 Finale of The Walking Dead also dominated TV-related Twitter activity, and was the #1 non-sports related program of the night on Twitter across all cable and broadcast networks, with 1.01 million show-related Tweets from 356,770 unique authors, generating a total of 63.11 million Twitter TV impressions, according to Nielsen. Twitter activity peaked at 9:22 pm EST with 25,183 Tweets, representing 84.6 percent of all television-related Twitter activity at that time. The Walking Dead was also the #1 non-sports related program for the day in TV-related Twitter activity, with the most unique authors and total Tweets. Leading into the premiere, a “Twitter takeover” live chat with the show’s cast and crew helped spike show-related tweets. With fans sending in their questions to Robert Kirkman, Scott Gimple, Gale Anne Hurd, Norman Reedus, Steven Yeun, Lauren Cohan, and more, the dedicated hashtag, #askTWD, was trending world wide on Twitter. The finale also generated dozens of simultaneous trending topics including #TheWalkingDead, TheWalkingDeadMarathon, TWD, Hershel, TheWalkingDeadSeasonFinale, RickandDaryl, Michonne, and TalkingDead.

The Walking Dead finale was also a trending topic of discussion on Facebook and over a 12-hour period, from 3:00 pm – 3:00 am EST, 3.1 million people had 5.8 million interactions surrounding The Walking Dead.

Staff member
Those are some really incredible numbers for a cable show!

The number of viewers will end up being much higher when DVR watchers & streaming subscribers are counted but those additional views don't traditionally count in the ratings.

The first 3 seasons are still my favorites. Season 4 was a strange departure from the momentum they'd established.
"Live Bait" 4.06, "Dead Weight" 4.07, & "Still" 4.12, were pretty awful. I was sick of the Governor. Bottle episodes were becoming tiresome.
"The Grove" 4.14, (a bottle ep, lol) is in my top ten episodes though. It felt like a horror movie! A separate classic story all in its own. For my friends & me, "The Grove" set our heads on fire. I remember making a "Look at the flowers" card for my supervisor, a Carol-fan.