LA Times - Hero Complex said:
When it came time to create the third installment of the "Toy Story" saga, John Lasseter gathered members of the creative team who worked with him on the groundbreaking computer-animated film -- Andrew Stanton and Pete Docter -- and retreated to a little cabin where they developed the story for the original 1995 animated film.

The group spent two days brainstorming ideas to arrive at a story drawn from their own life experience. Lasseter said he had just dropped*his son, Ben, off to college at Loyola Marymount University in Los Angeles.

"Driving away, when you leave your child behind at college, all I could think of was him as a little kid, sliding down the slide," Lasseter said in a press conference. "It was very emotional for us."

Lasseter said this life experience was the basis of the new story for Buzz and Woody, as the toys deal with the ultimate rite of passage* --* Andy's departure for college.

Never-before-seen footage screened for the audience at the D23 Expo opens with home-movie-style vignettes from Andy's childhood, as a boy being measured against a door frame (and measuring Woody), playing on the floor with his toys, followed by the jarring image of Andy as a teenager -- and the toys discussing his impending departure for college.

Next, the audience sees the familiar "Toy Story" characters dumped at a day-care center -- where the children disassemble Mr. & Mrs. Potato Head, slime Buzz and commit other comic mayhem. The toys decide to make a break for it.

Lasseter offered no more details about the much-anticipated movie, but he did provide some casting news. He said Michael Keaton will provide the voice of Barbie's anatomically incomplete beau, Ken. The movie's other voice talent includes Ned Beatty, "Curb Your Enthusiasm's" Jeff Garlin, Bonnie Hunt and Whoopie Goldberg.

The only new "Toy Story 3" character to put in an appearance at the fan convention was a hedgehog in green lederhosen and accessorized with a traditional German feather cap. The character, a thespian dubbed*Mr. Pricklepants, will be voiced by none other than*former Agent 007 Timothy Dalton.*

Staff member
Wow, can't believe I finally got around to watching Toy Story 3. Is a whole lot more emotional than the first two and was a fitting end to the trilogy. Catching all of the little things, like the Pizza Planet truck and Sid was enjoyable. The aliens with The Claw was a nice touch as well. The movie is watchable by kids who may not remember, or may not even have seen, the first two movies but for those who do the 3rd movie is a nice closure to one chapter and opens up the possibility for another.

I was really surprised at how good the movie is. Marvelous and wonderful like the first two. 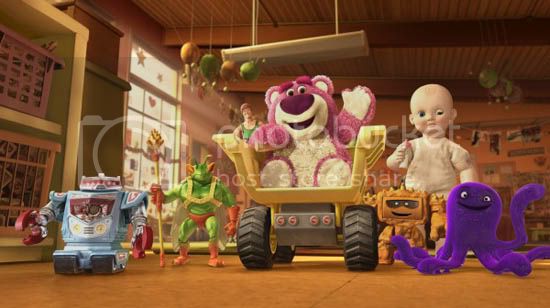 Starbeast from Planet X said:
I was really surprised at how good the movie is. Marvelous and wonderful like the first two.
Click to expand...

I have to admit, I'm a sucker for Pixar movies even though there are no kids in the house.

I loved all three! The first one will always be my favourite though.