Space Trio of Galaxies Mixes It Up

NASA Picture Of The Day
Trio of Galaxies Mixes It Up 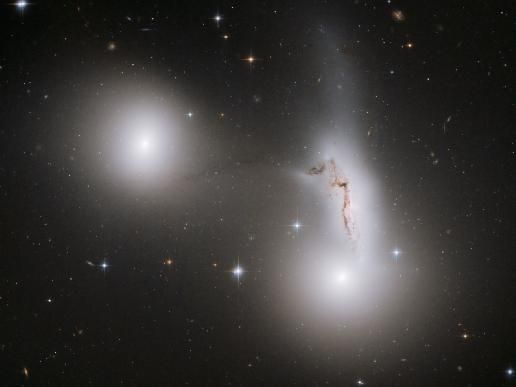 Though they are the largest and most widely scattered objects in the universe, galaxies do go bump in the night. The Hubble Space Telescope has photographed many pairs of galaxies colliding. Like snowflakes, no two examples look exactly alike. This is one of the most arresting galaxy smash-up images to date. At first glance, it looks as if a smaller galaxy has been caught in a tug-of-war between a Sumo-wrestler pair of elliptical galaxies. The hapless, mangled galaxy may have once looked more like our Milky Way, a pinwheel-shaped galaxy. Now that it's caught in a cosmic blender, its dust lanes are being stretched and warped by the tug of gravity. Unlike the elliptical galaxies, the spiral is rich in dust and gas for the formation of new stars. It is the fate of the spiral galaxy to be pulled like taffy and then swallowed by the pair of elliptical galaxies, which will trigger a firestorm of new stellar creation. If there are astronomers on any planets in this galaxy group, they will have a ringside seat to seeing a flurry of star birth unfolding over many millions of years to come. Eventually, the elliptical galaxies should merge, creating one single super-galaxy many times larger than our Milky Way. This trio is part of a tight cluster of 16 galaxies, many of them being dwarf galaxies. This particular galaxy cluster is called the Hickson Compact Group 90 and lies about 100 million light-years away in the direction of the constellation Piscis Austrinus, the Southern Fish. Image Credit: NASA, ESA and R. Sharples (University of Durham) (More at NASA Picture Of The Day)

Space Trio of Galaxies Mix It Up